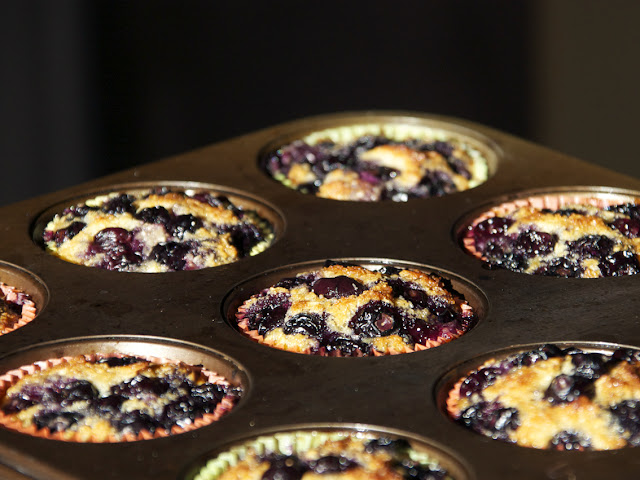 Blueberries seem quite exotic to me these days. I don't know if they are ever grown locally, and I could probably count the number of times we've bought blueberries here on one hand. But when I was at a large grocery store on the outskirts of Florence the other day, spotting the blueberries reminded me of a recipe I'd just seen for blueberry-coconut muffins.

It was actually the coconut that caught my attention when I came across the recipe on one of the blogs I like to visit (Simply Breakfast). The blogger, Jen Causey, is a photographer who loves 'breakfast + morning light', and she regularly shares the often zen-like photographs of her breakfasts on her blog. (You'll find the link under 'Inspiration' in the right-hand column.)

Jen's muffins were inspired by a recipe in a cookbook she'd been given, and the recipe I've included below was in turn inspired by Jen's―though I don't know if the author of the cookbook would still recognize it! Anyone who has seen the recipes I've posted to my website in the past knows that I offer them more as seeds that might grow into something new and unexpected...this is also how I tend to approach recipes. Part of this is due to rarely having every ingredient listed, but it's also because sometimes I just feel like exchanging apples for pears, or cinnamon for cardamom, or milk for cream...or adding anything else that sounds good. Cooking has to be creative to keep me in the kitchen―otherwise I'd rather stay in the studio.

I'm also a big fan of using what's on hand; this is often what determines what ends up on the table for lunch or dinner. It keeps things interesting, and means everything gets used up (one way or another). In the case of the blueberry muffins, it seemed like the perfect way to use up the egg whites left over from McCormick & Schmick's sublime CHOCOLATE BRIOCHE, which I had made earlier in the week. Oatmeal took the place of the flaxseed that we were missing, and butter filled in for coconut oil (although I used much less than the original recipe, even after doubling the dry ingredients). Since we didn't have any plain yogurt, I used a nice, creamy one with bits of cherry in it, and the cranberry sauce that we finally found in stock after Thanksgiving took the place of the jam. I'm sure there are endless ways to customize the ingredients to suit your pantry's contents and your personal taste and whims.

A few notes before giving you my variation on the recipe...

Preheat the oven to 350 F/175 C and line a muffin tin with paper muffin liners.

In a medium bowl, stir together:
1⅓ cups coconut (I used farina di cocco, 'flour' of coconut, which is already ground quite finely);
½ cup rolled oatmeal (toasted over the stove top for a few minutes, then roughly-ground with a mortar & pestle);
¼ cup demerara sugar;
2 tsps baking powder;
½ tsp salt;
until all ingredients are integrated.

In a small bowl, whisk:
½ cup egg whites + 1 whole egg;
then add & continue whisking:
1 Tbsp jam/similar condiment of your choice;
1 Tbsp yogurt (plain or a fruit flavor that goes well with blueberries/coconut);
then make a well at the center of the dry ingredients, pour in and stir with a wooden spoon.

In a small microwave-proof bowl or a heavy-bottomed pot over the stove, melt:
6 Tbsp butter;
then mix it in with the other ingredients. Let the batter sit for about ten minutes.

Divide the mixture among the compartments of a muffin tin; there should be enough batter to fill about ten. Sprinkle on:
10-12 blueberries per muffin;
then partially press them into the batter.

Bake for about twenty minutes (until a toothpick comes out clean). Let muffins cool completely before removing from the tin. Enjoy! (We found the taste and texture seemed to improve each day...)