And back to green again...

This post actually began 'growing' back in July. I had the images and tabbouleh recipe in mind for the 'Thinking of Green' post, but everything wasn't quite ready at the time—and then I got sidetracked by the green Arno reflections, the Regina Claudia plums and all of Venice's delightful shades of green.

Whenever my daughter is away I use the time for a solitary creative retreat of sorts, streamlining the usual daily distractions as much as possible. This includes being as efficient as possible with my time in the kitchen; I eat well, but very simply. One of the things I like to make is a huge bowl of tabbouleh—my daughter doesn't really care for it and I love it. So much parsley...so much green goodness... 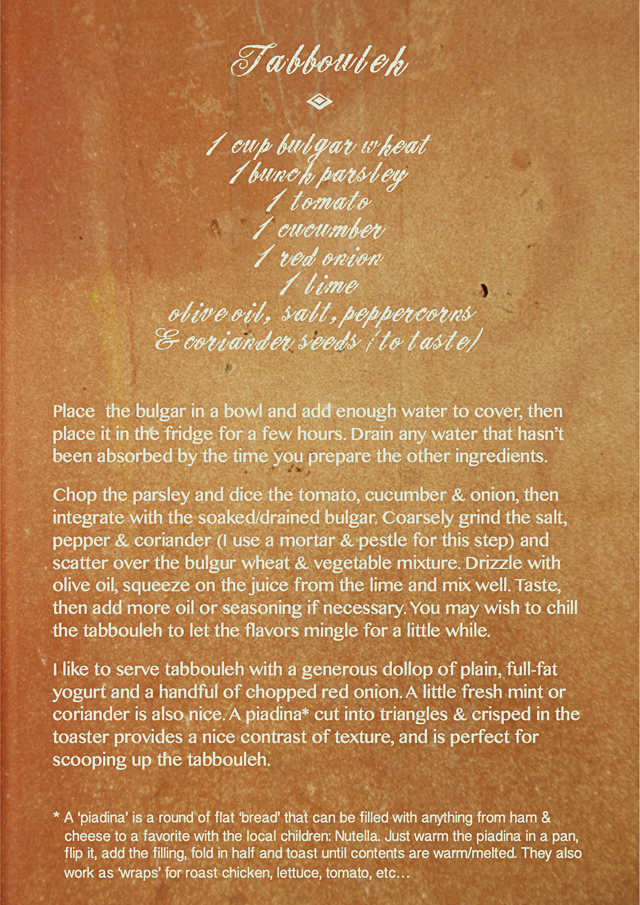 As always, I offer 'recipes' as guidelines, with the hope that others will use what they have/what they like and adapt that which they don't.

Each time I've made tabbouleh lately—or any other recipe for which mise en place is fundamental—I have used it as an opportunity to continue research for my Book Art Object (BAO) edition, as the title I have chosen is 'Mise en place', i.e. the assembly/preparation of ingredients. (I have only mentioned this project obliquely a couple of times this year and will give more background when my edition of artist books is complete, but the gist is that a group of nearly one hundred artists is borrowing story titles by another artist as inspiration for their own books.) After making so many past artist books in a period of mere weeks, in order to meet deadlines for various 'calls for submission', it has been such a pleasure to luxuriate in the creative process for this one. And from all of the research/brainstorming sessions/contemplation/experimentation has come the idea for yet another project using ingredients as inspiration...

I wrote this passage from the Piazza di Santo Spirito chapter of The Piazzas of Florence when the parallels between the studio and the kitchen were just beginning to dawn on me. It was perhaps the seed of what has grown into a fascination with photographing ingredients (usually before transforming them into something new), as well as learning how to embrace time spent in the kitchen.

After returning from the market I arrange the vegetables that will go into soup for dinner tonight. Each time I enter the kitchen my eye is drawn to the orange flesh of the pumpkin, the papery purple skins of red onions, the feathery tops of the fennel and the leafy cavolo nero, a cabbage so dark that it's called 'black'. In a brown wicker basket I compose a still life with the sunset colors of pomegranates, persimmons and new apples, then select a dark green and raw siena bowl whose colors, if mixed together, would create the same mottled hue of the dusky golden grapes now cascading over the edge. Although I often only have time to arrange the produce quickly, in my mind I am capturing these simple shows of beauty with a paintbrush or pencil. Of course, food is also a medium in its own right, offering the opportunity to express creativity for fleeting moments of time—as a weekday dinner, a long lunch, or a gorgeous dessert.

Returning once again to the green theme, here are a few more photos from the recent trip to Venice. I was already on the lookout for 'BLUE', but since I had just put together the series of images for 'GREEN' the day before we left, I found myself continuing to be alert to all things green. While Venice has plenty of blue, the lagoon is famous for its often-green shade. I'm not sure what causes the phenomenon, but it can be quite striking, and even jarring in its opaqueness (as in the second photo). The foliage of the hydrangea bush in the third picture looks rather anemic—a chlorophyll deficiency?—but was surprisingly similar to the color of the van behind it (this was on the Lido, where vehicles are allowed). I always enjoy catching the occasional mossy-green reflections of trees along the canals (bottom pair of images). 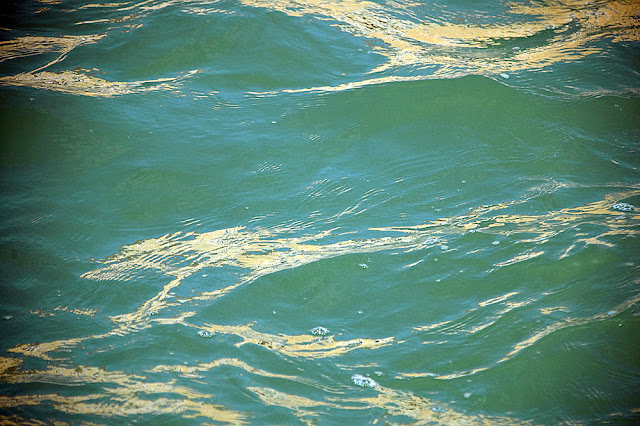 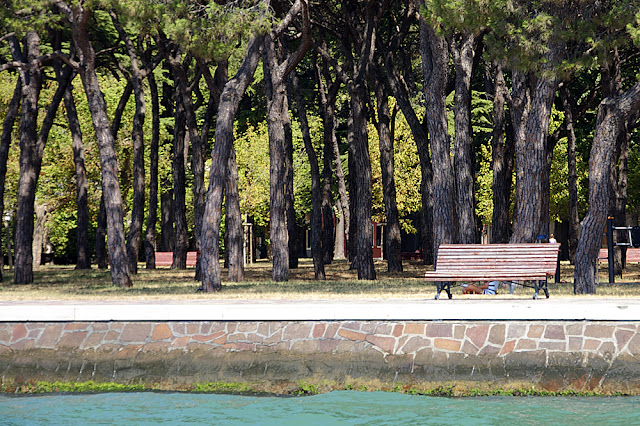 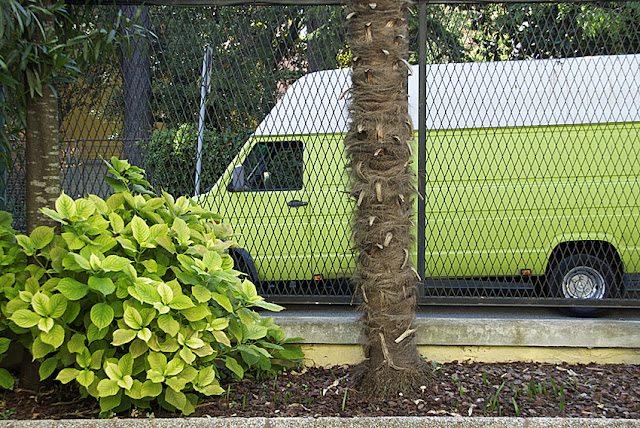 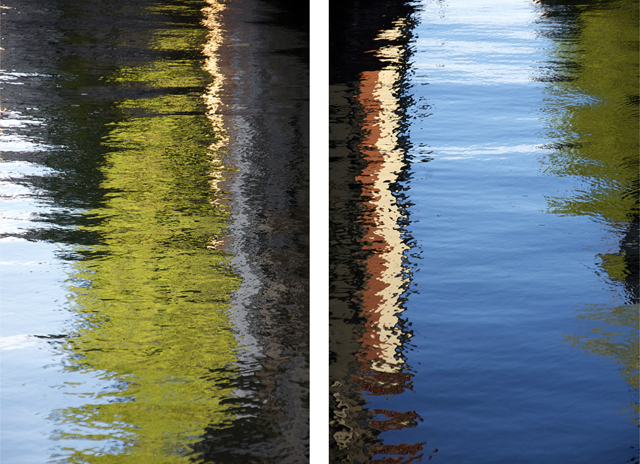 *
And here's one last photo, with multiple layers/textures of green, taken during a quick visit to the Rose Garden this month. I'm not sure what the sun-baked flowers in the foreground are, but they certainly caught the light beautifully that morning... 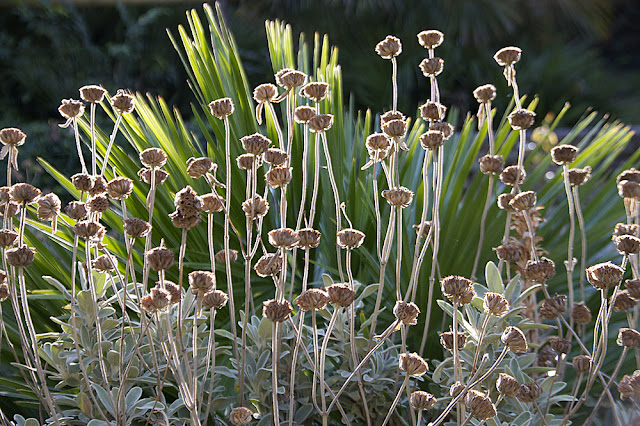 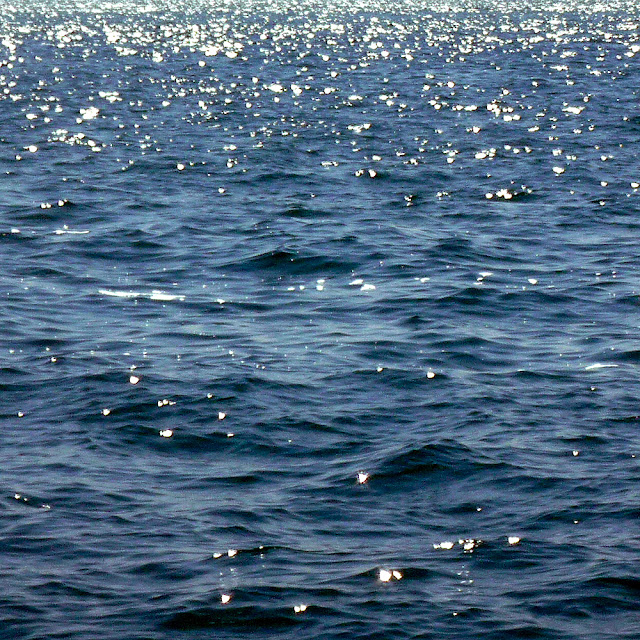 Blue is September's color for the photo challenge that artists Jennifer Coyne Qudeen & Julie Booth have inspired these last several months. For many years I have thought of blue as my least favorite color, yet I do like many shades of blue. My first pair of starter earrings, chosen at age nine, were set with sapphires, and I remember consciously switching my favorite color to blue while watching fireworks on the Fourth of July the summer I was thirteen. Since college I have been partial to tubes of Prussian Blue oil paint, and the depth of blue at twilight still takes my breath away...

As with 'ORANGE', 'YELLOW' & 'GREEN', this month's selection of photos also features Venice. At the top of the page is an all-time favorite view of the lagoon...I just love all of the sparkles that appear when the sun is behind the water. Next are a few sets gathered from past visits, and they are followed by several more from our beach stay on the island of Lido last month...this is actually the first chance I've had to look through them properly. Some were shot with an eye toward this month's color, but out there on the eastern edge of the island, with a direct view of the sea, you can hardly escape all of the blue! (And, coincidentally, the public beach where we rented umbrellas/chaise lounges was called Blue Moon...)

It was a truly wonderful, restorative trip. On the chaise lounge next to me, my daughter read literature assigned as summer reading & guitar magazines, reviewed drumming rhythms and listened to hours and hours of music. But I found that following the coming and going of the gentle waves held my attention much of the time.

I've been very behind with my blog-following and blog-writing in the last month or so, and am happy that the latest photo challenge has given me a little push to put together a new entry (the followup to GREEN that I had mentioned last time has been hovering at 'almost-ready', but then BLUE snuck up on me). I hope to begin catching up again soon...autumn tends to have that effect—of getting things back on track again—I think. 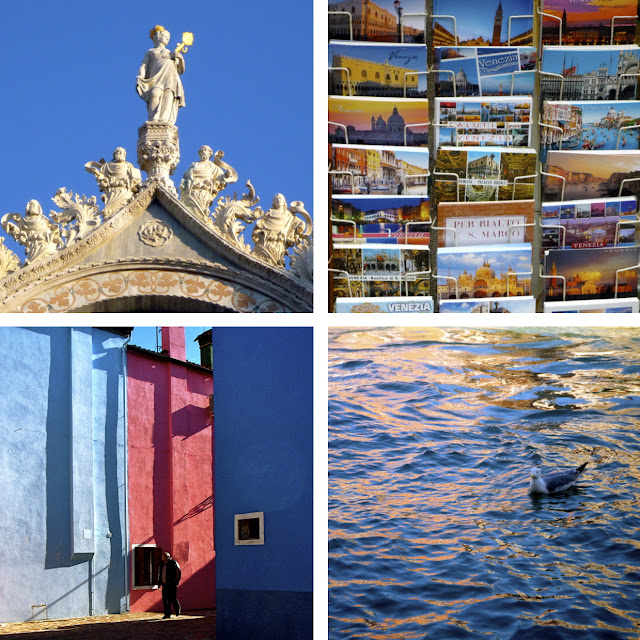 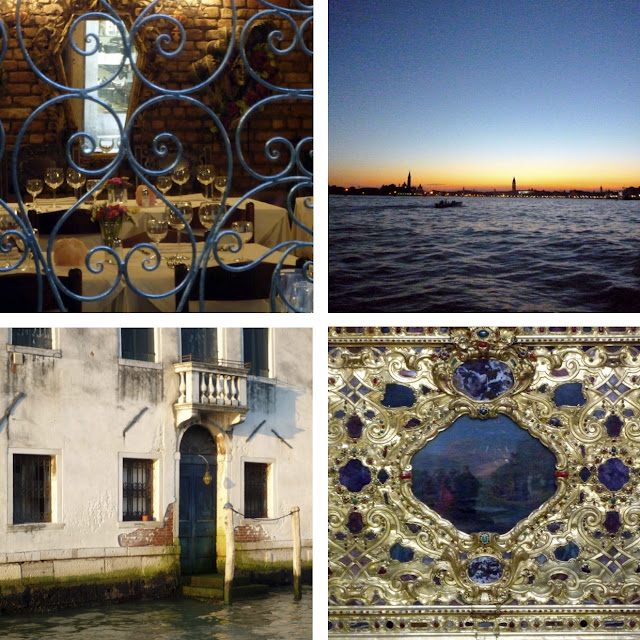 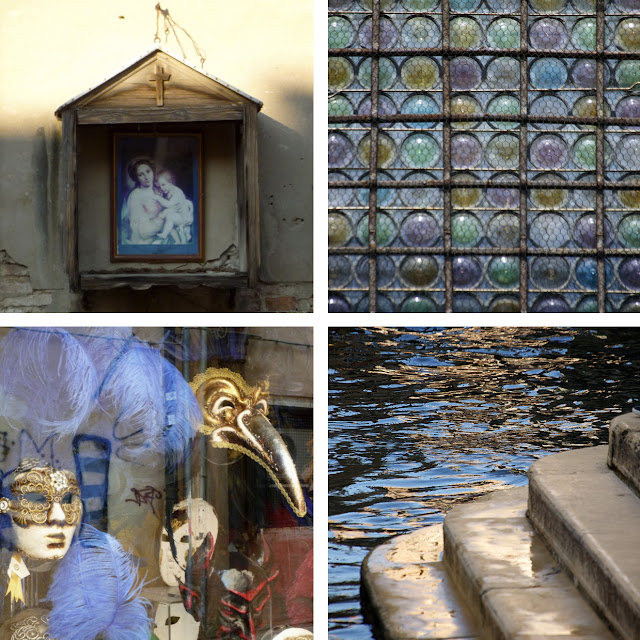 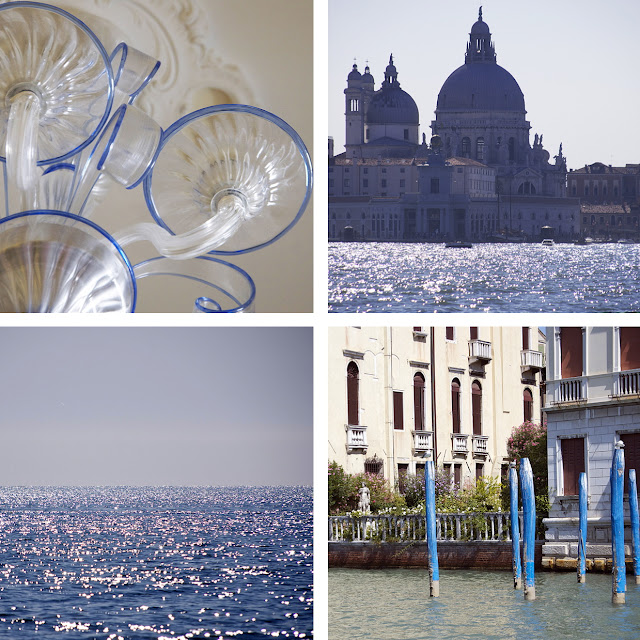 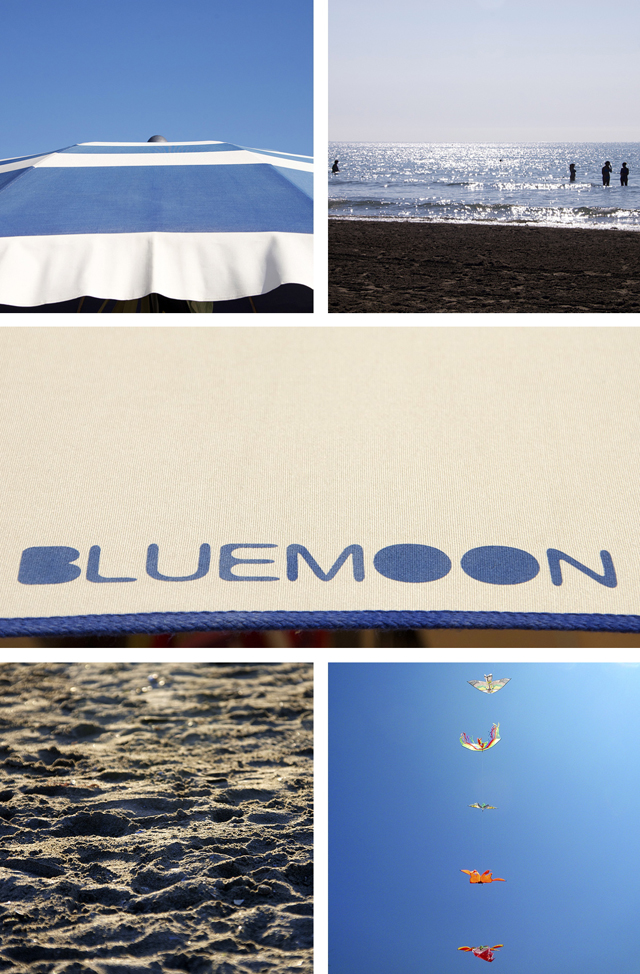 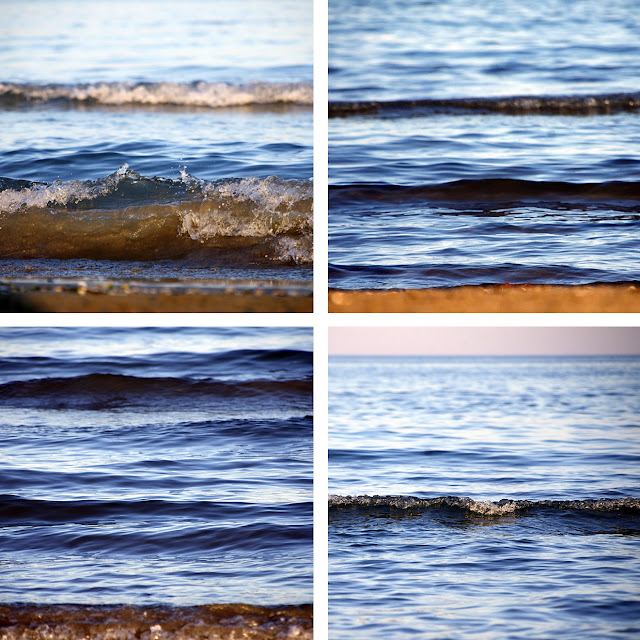 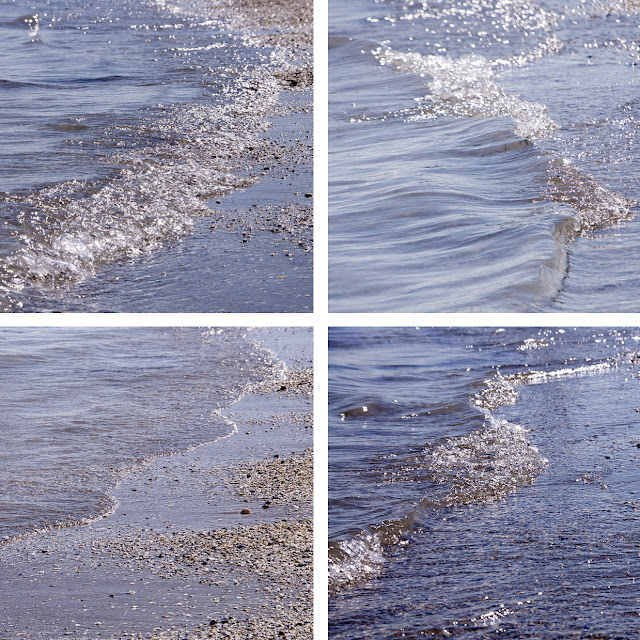 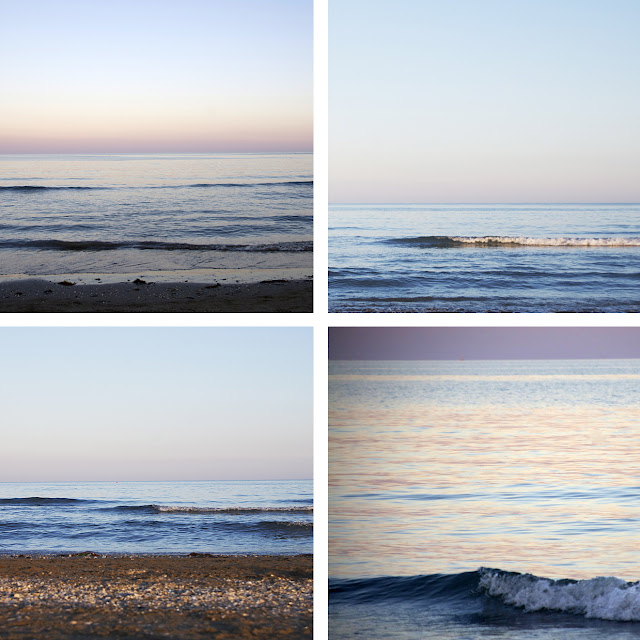 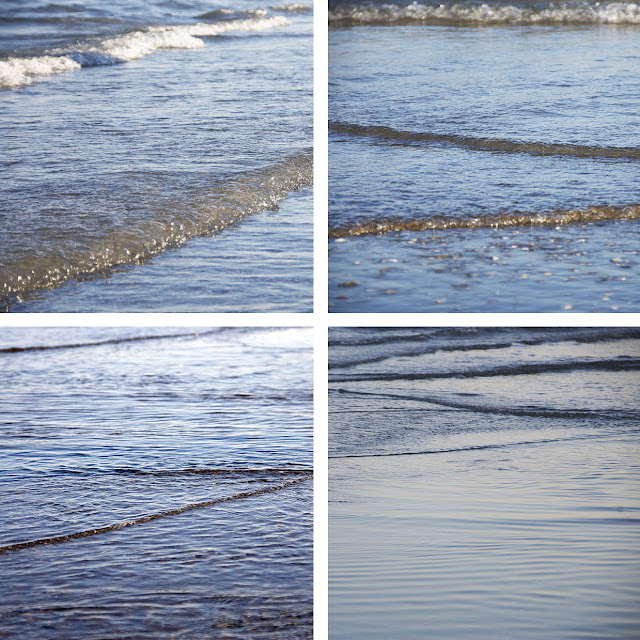 And below is one last image, this time of the Arno (which is not blue as often as one might think a river should be!). 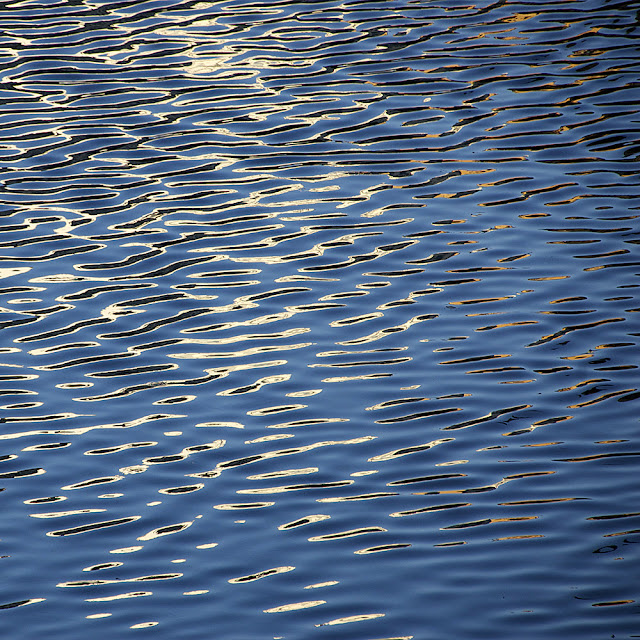 Happy autumn to those of you above the equator (and lucky those of you enjoying spring!)...
{Please see the guidelines here if you'd like to participate in the color-themed photo challenge in future. October's color will be 'INDIGO'.}