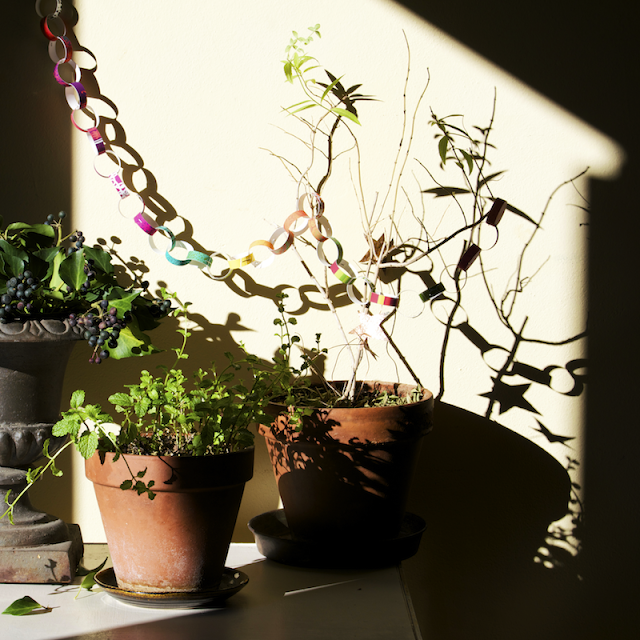 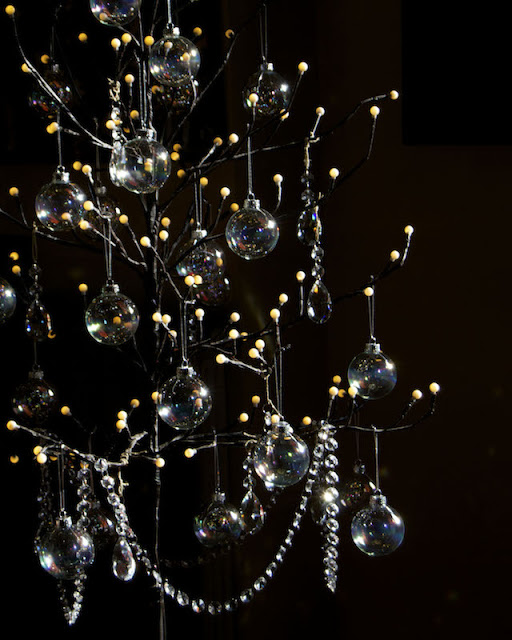 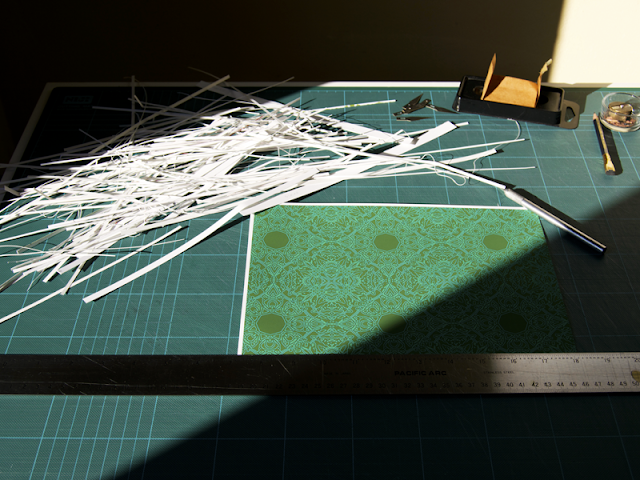 For the past year I've been busy with pattern-making. A handful of designs came about through digitally recoloring my hand-marbled papers. Some, like the pomegranates, artichokes & lemons shown further along this post, are based on illustrations I made for my BookArtObject cubes ( Mise en place); others are composed of layers & layers of precisely spaced letters (now unrecognizable as such), an idea inspired by a past ALaW project.


I had in mind a collection of a dozen or so to begin with, but "exponential" is a word that comes to mind when describing this project! The number has fluctuated as the designs evolved, but I finally settled on thirty-two for now.

Below is a snapshot from when I was in the process of organizing, shuffling & reorganizing the printouts into mini "collections"—many times!—a process I found immensely satisfying/enjoyable after the intense, detail-oriented period of designing & editing.

I was searching for some kind of logic behind the various combinations, and it was actually quite challenging to arrive at a single, "ultimate" way to group them—but the great thing I realized is that there's plenty of flexibility. Personally, I love the idea of being able to assemble a custom set of just about anything, whether it's a palette of oil paints/watercolors/pencils...or a set of stationery or dishes or clothing. Flexibility & choice are both cornerstones of Studio Milledisegni, but I must admit that it was difficult to come up with a good way to present all of the options to customers! 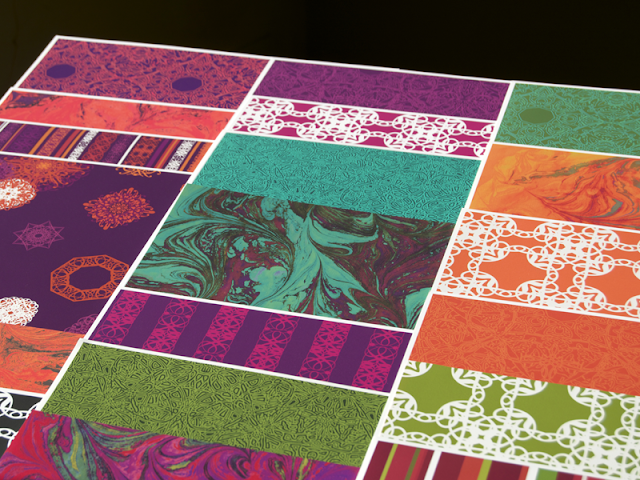 Here are a few of the natural groupings that "emerged"... 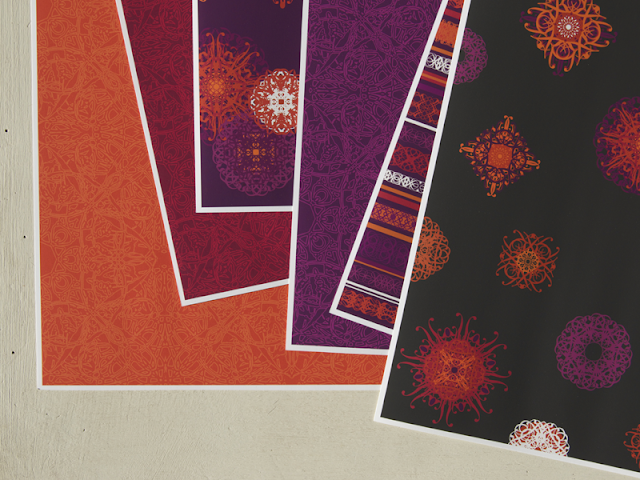 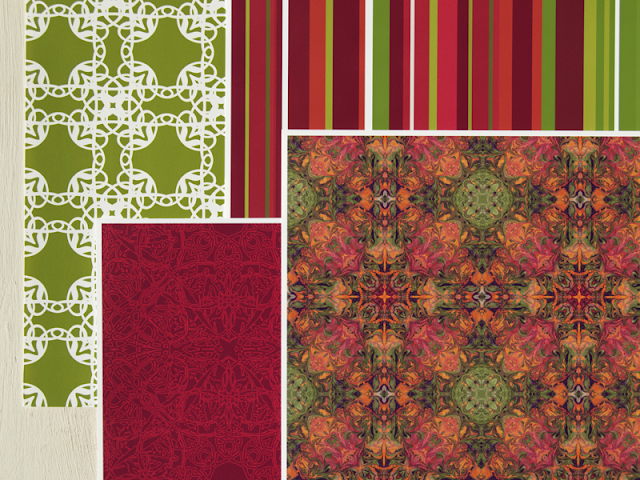 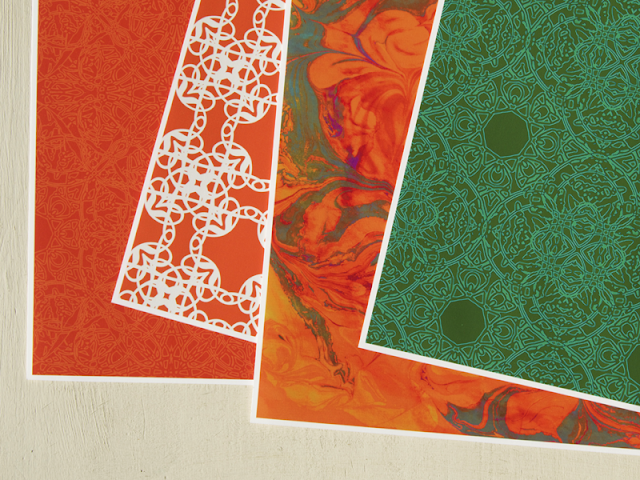 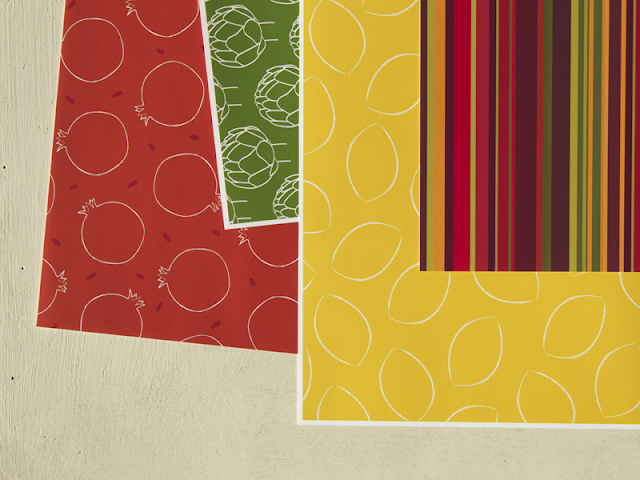 There are many more designs (not to mention combinations), and I'm hoping that others have as much fun as I did when putting together their own customized sets. (The 12"x18" sheets are offered in "mix & match your own" sets of 8/12/20/32.) I've been using them for wrapping small gifts (as shown in my last post), lining drawers, creating gift tags & envelope liners, and one of my favorite ideas so far has been a book cover. I trimmed  one of the marbled papers to wrap around a book I was giving my daughter for her birthday, so it served first as the gift wrap, and now as a dust jacket/place marker. We're hoping to make some decorations for our Christmas tree with the papers this coming week, and I'm excited to see what other creative souls will come up with...

Some of these designs are also offered through my studioMdesigns items (cell phone cases, zippered studio pouches, clocks, notebooks, etc., which are produced by a print on demand company). While paper will always be my first love (and it feels odd to give up control over the production process) I must admit that it can be pretty intoxicating to see one's work transformed into such a vast selection of media!

I hope you are all finding time to be creative, whether in the kitchen, the studio, the garden...or wherever you might/must be spending your time at the moment. Happy holiday season! 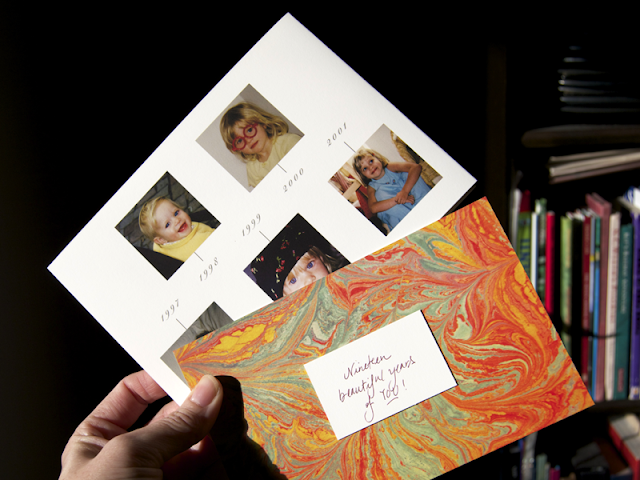 I thought I'd share a few things I made for my daughter's nineteenth birthday last month. I always look forward to creating something to make her day more special, whether from paper or eggs/butter/sugar/chocolate (usually all of the above)!

The image above (and the next two) show an accordion booklet/"card." I chose one photo from each year of my daughter's life—twenty in total, including the year she was born. It was so much fun to hunt down old photos...though extremely difficult to narrow my selection down to only one per year! I was fascinated to see the changes from one year to the next...sometimes it seemed like a natural/logical progression; other times as if I was looking at two different girls!

One of my hand-marbled designs (that I digitally colored) made a sort of title card in the clear "envelope." 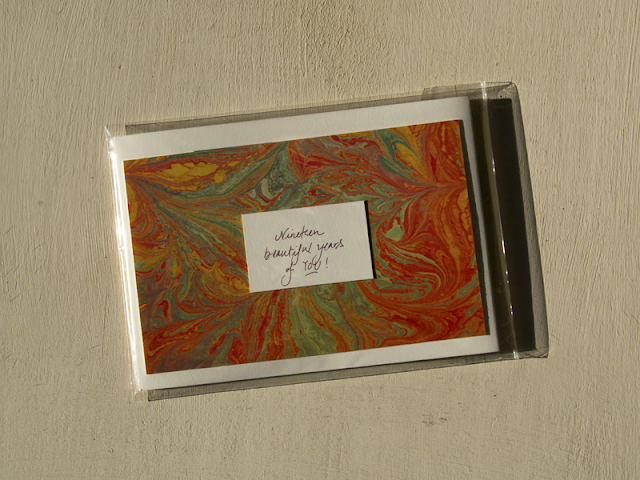 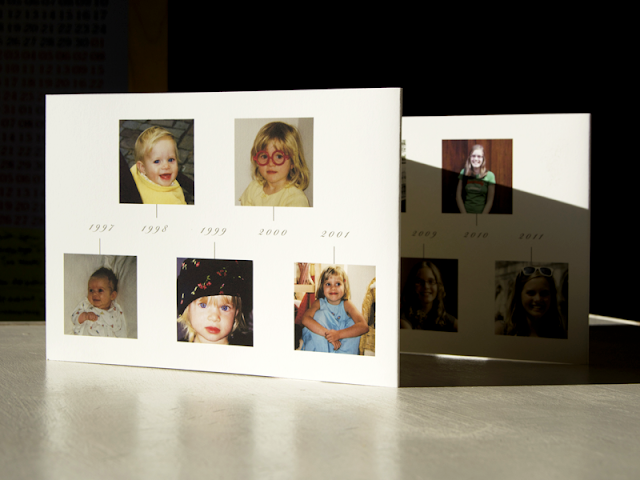 My birthday is just a few weeks before my daughter's, and since she spends most of October "researching" a cake for me (!), it's not easy to follow her act in the birthday cake department. She's become quite enamored of the "tris" concept lately, so I decided to put together a trio of sweets: I made spiced espresso brownies + a cardamom & cinnamon chocolate mousse served with fresh cream, and there's also a flourless chocolate/chili pepper cake from our favorite local bakery . It was a perfect excuse to use our gorgeous platinum-rimmed Annie Glass plates, which allowed some breathing space for the sweet indulgences! 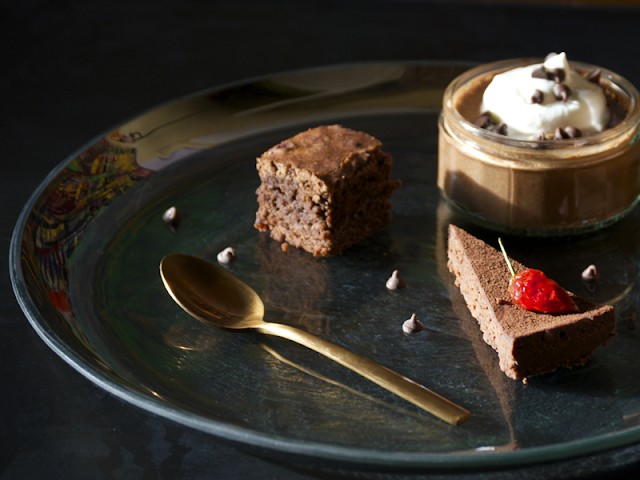 My daughter's birthday came just a few days before the StudioMilledisegni launch, and it was exciting to be able to use some of my original paper designs to wrap her birthday gifts this year—somehow those I had test printed ended up going together quite well. Shown in the photo below are a few batik-y patterns that (believe it or not) began life as an ALaW project (thank you, Fiona AKA Paper Ponderings!)...dozens of letter shapes are manipulated/juxtaposed with/superimposed upon one another. The swirly pattern is one of my digitally colored hand-marbled papers, and the one in front at the left is a reproduction of a copper tray that has developed a beautiful patina over the years.

This style of wrapping gifts, with the multiple accordion folds, is something I picked up when I lived in Brazil in the 70s—even at the basic/everyday department store (there was one called Lojas Americanas, i.e. "American Stores") someone would wrap packages like this at the cash register while the cashier was ringing up your purchases. (I wonder if they still do this?) I am hoping to do a how-to video on Instagram once I add the decorative paper sets to my shop... 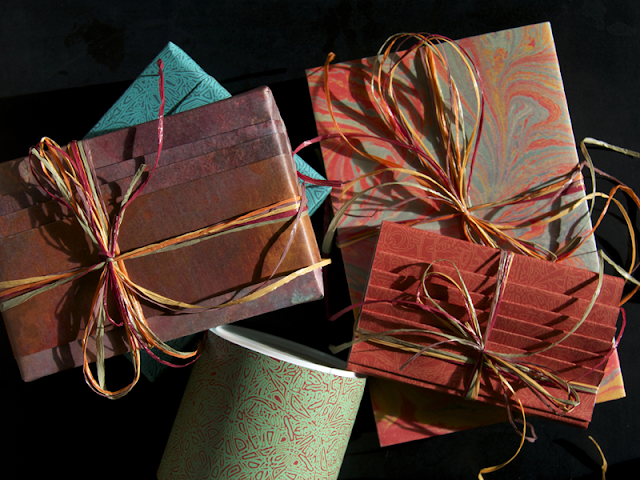 Even after a couple of weeks, I am not quite used to the idea that I am the mother of a nineteen-year-old. I must say I feel pretty lucky to still have her at home—I was off to college at seventeen, but the kids go to high school for five years in Italy. She fills our home with music & creativity, not to mention the fragrance of her inspired baking!

Hoping you have all had a very happy December so far, and paper & sugar wishes to everyone...