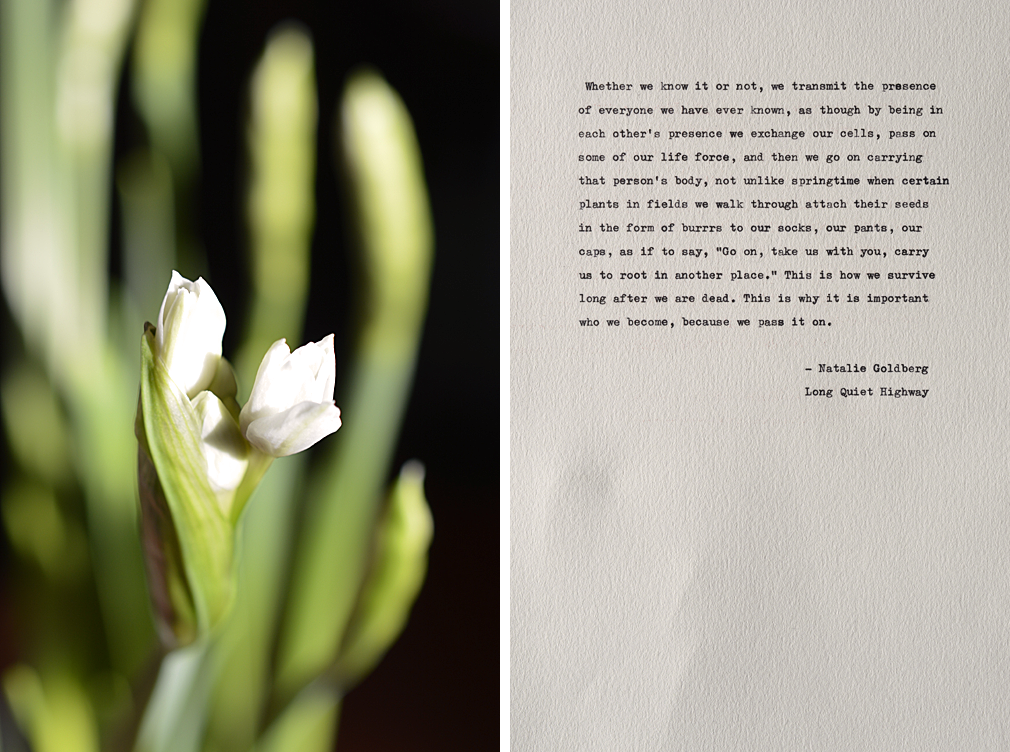 As is true every January, the paperwhite bulbs are beginning to bloom. Witnessing tiny miracles like this always fills me with hope, something we could do with around here right now. Things are still very sad as I watch my daughter going through the most difficult period she has ever faced. Disbelief continues to be my overriding emotion, and acceptance seems far away.

Besides hope, comfort is another thing you need in times like this. When I opened up Natalie Goldberg's Long Quiet Highway to a random page the other day, the first paragraph I read led into these words:

Whether we know it or not, we transmit the presence of everyone we have ever known, as though by being in the other person's presence we exchange our cells, pass on some of our life force, and then we go on carrying that person's body, not unlike springtime when certain plants in fields we walk through attach their seeds in the form of burrs to our socks, our pants, our caps, as if to say, "Go on, take us with you, carry us to root in another place." This is how we survive long after we are dead. This is why it is important who we become, because we pass it on.


I always find Natalie's words to be relevant, reassuring, full of compassion and hope, and this time I found comfort in them too. So I typed them up to keep nearby, as a reminder that those we lose will always be part of us. It will also remind me how important it is to live as well as we can, since we will one day be passing that on to others... 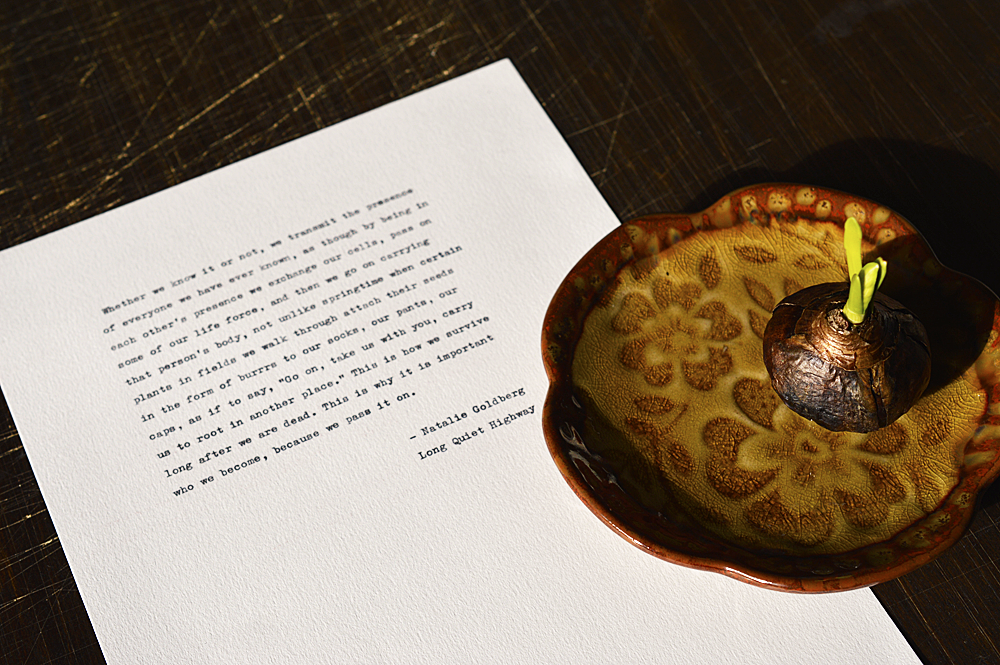 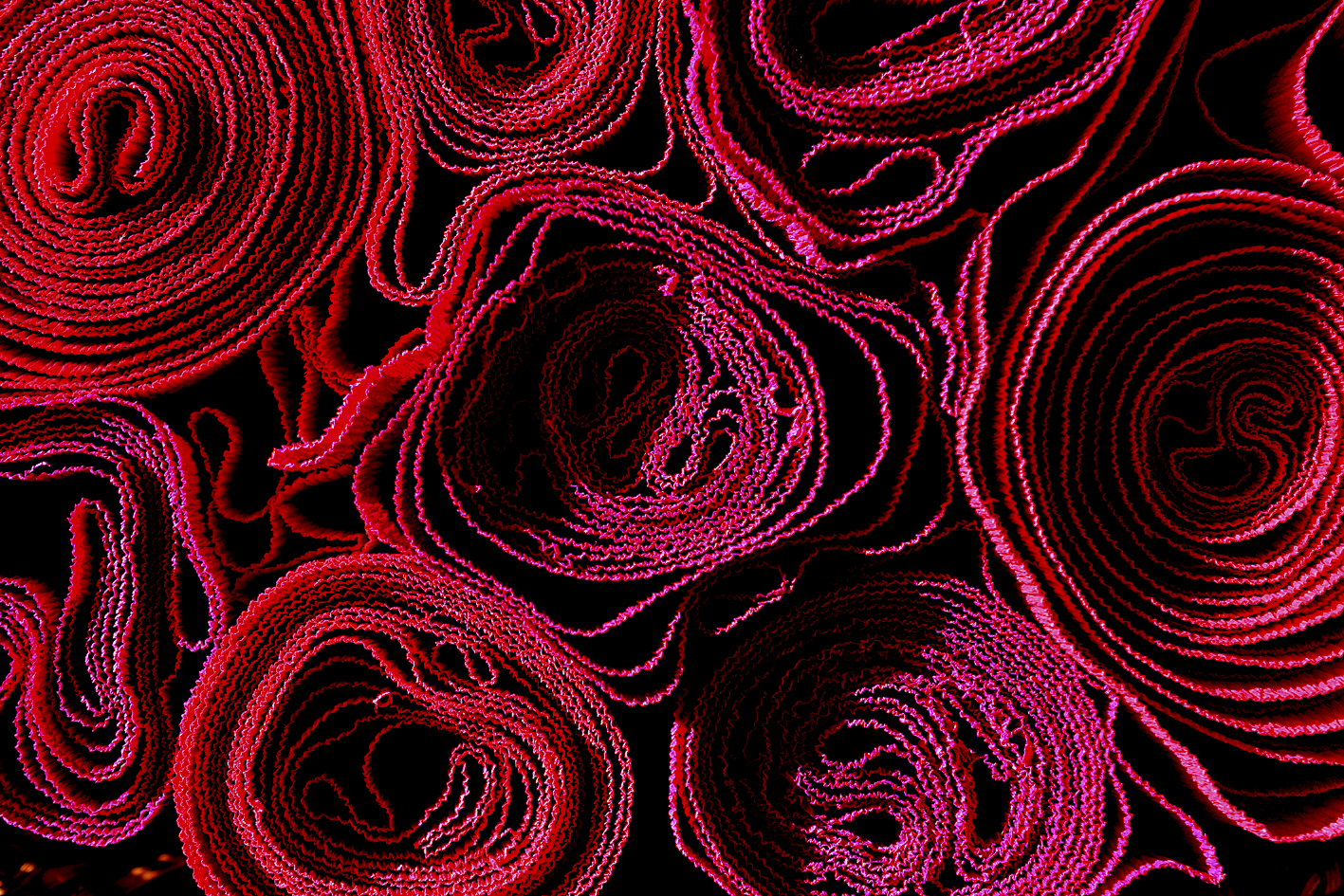 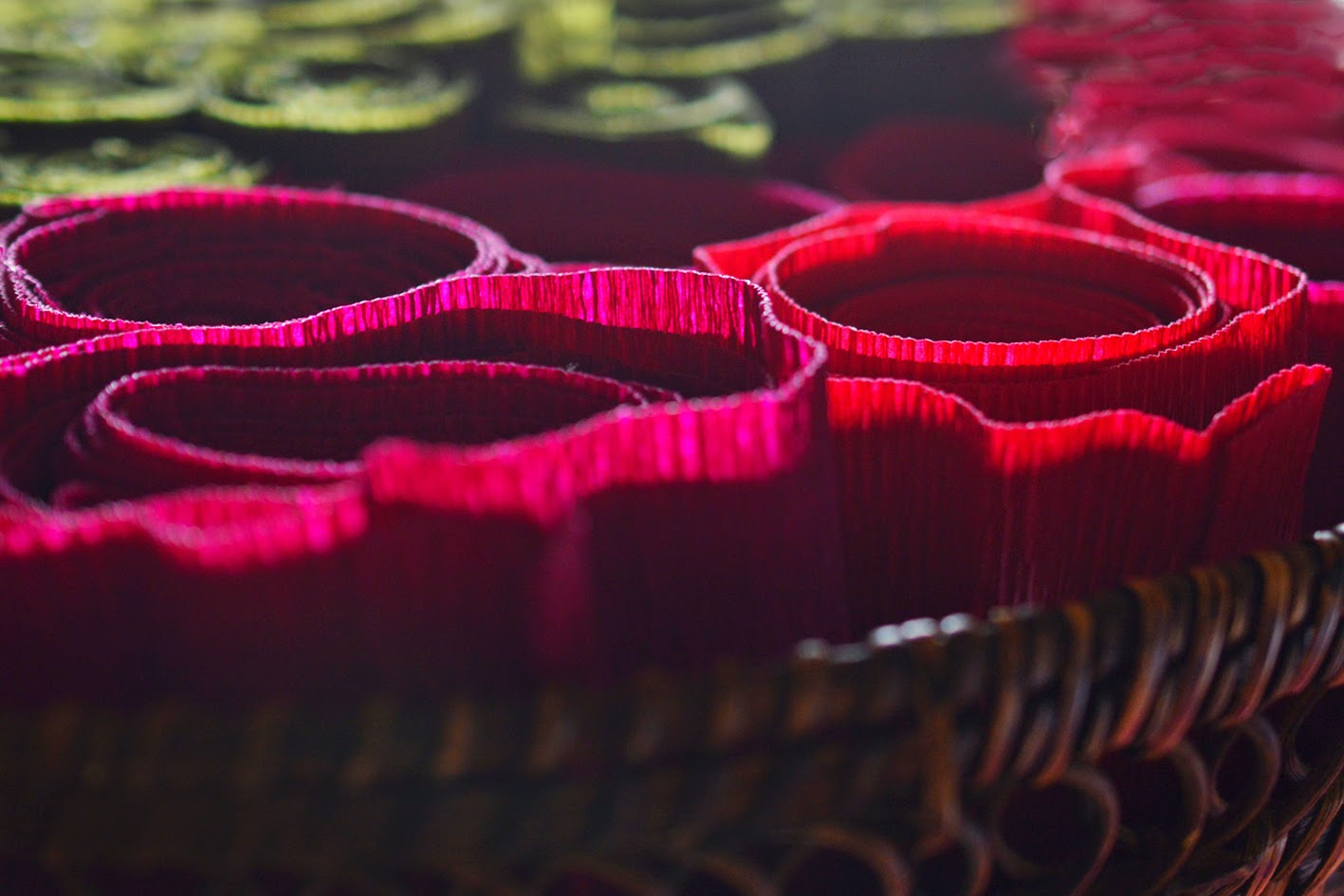 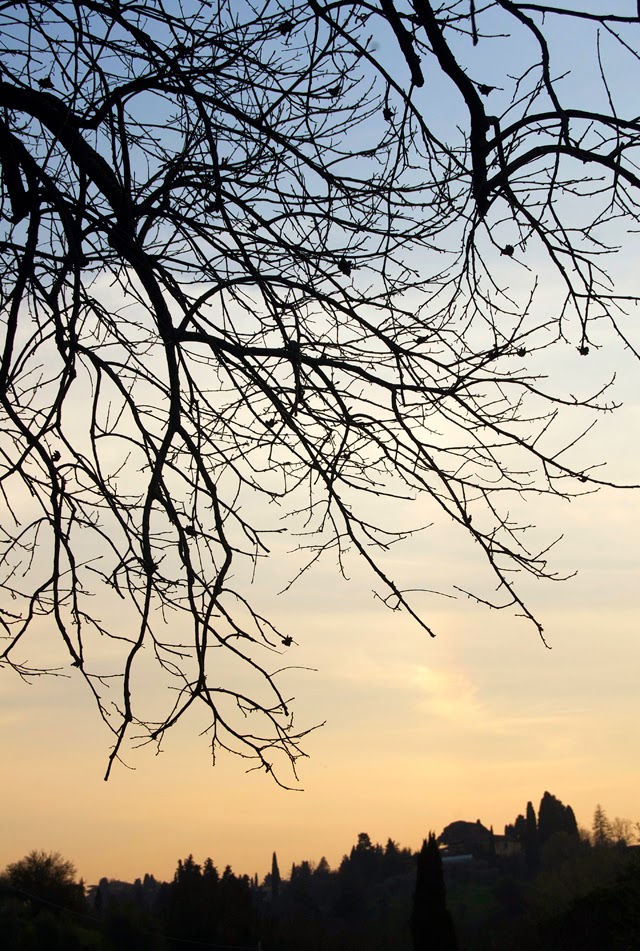 This post was originally going to be called "Three years," alluding to today being the three-year anniversary of Arzigogolare on Blogger. But instead of taking some time over the last few days to revisit the past & consider the future of this blog, the week took a very different turn from what I had planned. Unfortunately it was not the pleasant, creative kind, where you're following whimsy & finding serendipity. Instead, the week began with the unthinkable news that one of my daughter's closest friends had died, very suddenly and very unexpectedly, of a fluke medical complication.

I have been lucky that death has taken few close to me in the last forty-seven years——and never a dear friend who was part of my every day. This means, though, that I don't really know how to deal with such things. It's hard enough to comprehend the hostage situations, killing sprees, plane crashes and other tragedies that happen all-too-often around the world, but finding a place in my mind for this quiet, but very intense, close-to-home event has been a terrible struggle...and I hardly know how my daughter and her tight-knit group of friends are managing to get through it. Well, actually, they are the only thing getting themselves through it. They have clung to each other, cried with each other, supported each other, and are beginning to find ways to honor the friend who is no longer with them.

All week I have been trying to understand why I can't seem to come to terms with Marco's death. Maybe because there is no explanation or reason, no logical chain of events: he wasn't hit by a drunk driver, he wasn't doing drugs, he didn't have a terminal illness. He was a good kid. There's no lesson here; he was valued, he was loved. I could try to look at it from the standpoint that he had the best eighteen years that a person could, that he is a vital part of memories that his friends and families will always hold dear. But I can't help but mourn the future he will never live...the future that so many had counted on sharing with him.

And I mourn for his family——for the younger brother who shared a room room with him, for his parents having to bury their beautiful eighteen-year-old son and all of the dreams they had for him.

I mourn for his many, many friends, and the musicians in the multiple bands he played guitar for. And there's been that core group of friends that my daughter is also part of, nearly inseparable, who have been like a second family to one another, helping to navigate the waters that take some teenagers on a pretty scary journey. I've admired how there was no drama among them, just music & memory-making. At least you can say they didn't waste their precious time together (though I am not really at the point where I can use "at least this..." and "at least that..." to rationalize or find comfort).

I mourn for his girlfriend of the last year-and-a-half. She has been friends with my daughter since first grade, and it has been amazing to see her blossom in the time since she met Marco. They were the couple who everyone assumed would be always be together——the ones who must have given the rest of them hope for someday finding someone too.

In trying to work through this, I realize that one reason this tragedy feels so close to home is not only because of Marco's importance to my daughter and her dearest friends, but also of course because losing a child is the always-present fear of every parent. I have been extremely lucky as a mother; my daughter brings joy into my life daily, and our household is a harmonious one. I will admit that my mind sometimes wanders to what it would be like to lose my daughter——you never know what tomorrow holds, as is glaringly clear now——but in the light of such thoughts I always comfort myself with the knowledge that she has lived seventeen years fully and beautifully, and that I have had the privilege of loving, cherishing and being proud of her every single day. I know now, though, how naive it is to think that would be enough. To lose her would be unbearable...

I suppose it boils down to this: we don't know which day will be our last on this earth. All we can do——or at least a start——is to live every day as well as we can...to recognize the beauty each day holds, and to find & give joy.

...Any man's death diminishes me, because I am involved in mankind, and therefore never send to know for whom the bells tolls; it tolls for thee.

― John Donne, No Man Is An Island - Meditation XVII

I do hope that others of you out there have had a happier start to the year, and may you find comfort in the sadnesses and difficulties that, inevitably, do come. But may they be few...