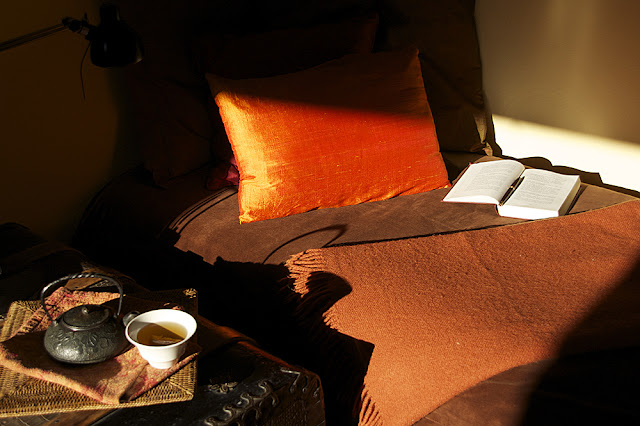 In this indoor season that is conducive to wool slippers & feather duvets, reading, baking & tea drinking, a passage from Christopher Alexander's A Timeless Way of Building often comes to mind. (This is the book that lays the foundation for patterns such as those from yesterday's post.) Alexander asks the reader to envision this scenario, which describes the concept of 'comfortable', in an attempt to explain something he calls the 'quality with no name':


Imagine yourself on a winter afternoon with a pot of tea, a book, a reading light, and two or three huge pillows to lean back against. Now make yourself comfortable. Not in some way which you can show to other people, and say how much you like it. I mean so that you really like it, for yourself.

You put the tea where you can reach it: but in a place where you can’t possibly knock it over. You pull the light down, shine it on the book, but not too brightly, and so that you can’t see the naked bulb. You put the cushions behind you, and place them, carefully, one by one, just where you want them, to support your back, your neck, your arm: so that you are supported just comfortably, just as you want to sip your tea, and read, and dream.

When you take the trouble to do all of that, and you do it carefully, with much attention, then it may begin to have the quality which has no name.

'Comfortable' is just one of several words Alexander cycles through in an attempt to further describe the 'quality with no name'. He begins with 'alive', next is 'whole', then back to 'comfortable', and on to 'free', 'exact', 'egoless', 'eternal', and 'ordinary'. After analyzing them one at a time, he finally concludes: "And so you see, in spite of every effort to give this quality a name, there is no single name which captures it." I like his suggestion that we "Imagine the quality without a name as a point, and each of the words which we have tried as an ellipse. Each element includes this point. But each ellipse also covers many other meanings, which are distant from this point." And, whether it gets us 'there' or not, I find the passage about making yourself comfortable with tea, books, cushions & dreams to be a lovely image.


{In case you haven't come across it before, this past entry offers more
details about Alexander, his patterns, and the 'quality with no name'.}


On the theme of such comforts as tea, every time I wait for a pot to brew I think of this passage from The other Alice: The Story of Alice Liddell and Alice in Wonderland by Christina Björk, which is, as the author explains in the foreword "...a 'mischmasch' of of what we KNOW happened, what PROBABLY happened, and what COULD have happened." (Charles Dodgson was Lewis Carroll's real name.)


Mr. Dodgson boiled the water and poured it over the tea leaves. Then he walked back and forth, carrying the pot. "Why are you doing that?" asked Alice.

"Well, you see, the tea draws better when it can move around a bit," said Mr. Dodgson. "Once upon a time, there was a T that only stood still. It became so depressed it had an attack of nerves and went all to pieces."

Mr. Dodgson drew a picture of how terrible it had been for poor T. And by that time the tea was ready. Alice ate quite a few scones with jam...

Naturally, this leads to visions of scones dancing in my head; below is how I make them. 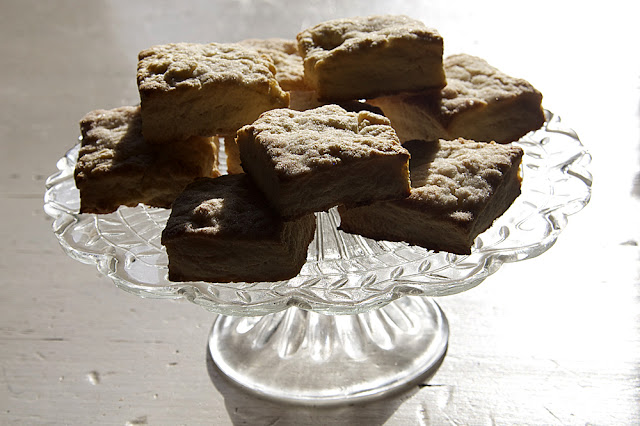 Enjoy warm, with butter and/or jam, or jam topped with a dollop of cream (though I find that, with the sugar-sprinkled tops, you don’t actually need jam, butter or cream). I've also made these with half a cup of raisins, dried cherries or dried cranberries. Sometimes I also add a handful chopped pecans or hazelnuts along with the dried fruit. 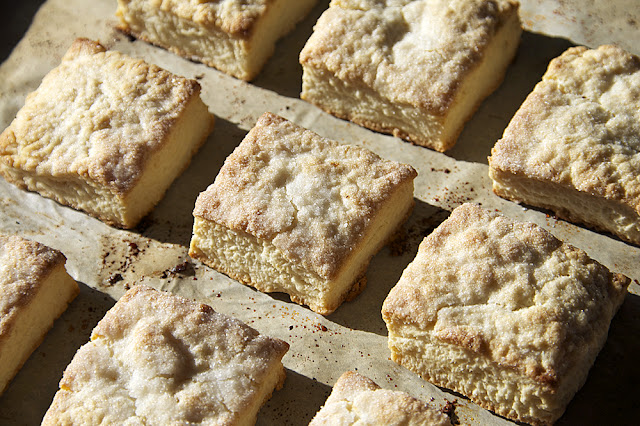 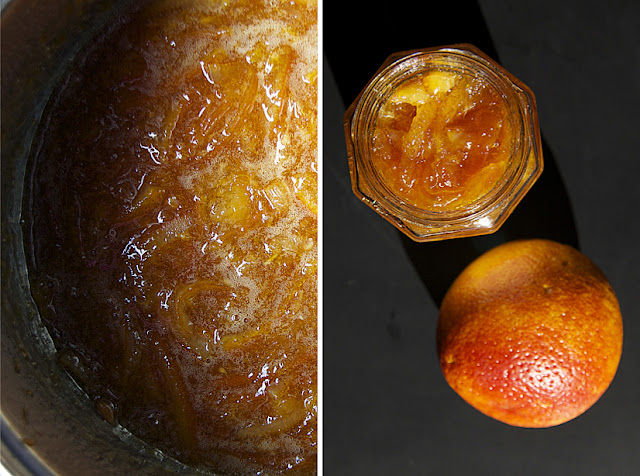 Hoping to somehow preserve the deliciousness of the blood oranges that are in season right now, I recently I bought six kilos of them (both the Moro & Tarocco varieties) and tried making marmalade for the first time. I found a recipe for a small batch of blood orange marmalade, which requires only four or five oranges—leaving plenty to eat whole or juice—here. A broken candy thermometer (plus my lack of canning experience) led me to overcook the marmalade, but it's still incredibly good once it's been softened in the microwave—and perfect on the scones...

Milky coffee is my drink of choice in the morning, but making a pot of tea is the ritual I look forward to in the afternoon. I find there's also a certain beauty in the humble tea bag, which is the 'material' I have been exploring this month. As with last month's material—paper—the exploration is not so much about making something with it, but more about the beauty of the material in its original form.

While I generally prefer loose leaf tea, Le Palais du Thés also offers very good tea in muslin bags. As I enjoyed a box of Margaret's Hope (their Darjeeling tea), I began saving the little cloth bags, with their pretty labels, hoping to use them in the studio somehow. I've considered different ideas—perhaps slitting the side of each bag and replacing the tea leaves with folded papers to write on; adding more 'pages' to the existing labels at the ends of the string (to form miniature 'books')/otherwise involving the string; or embroidering/stitching on the muslin—but for now have simply focused on playing with & photographing them.

It seems a lot of artists find inspiration from drinking tea. One example is Heidi Zednik, who records her thoughts on tea bags salvaged from her daily tea ritual. I first came across her project via an exhibition held at the Abecedarian Gallery, One Unit per Increment, which brought together works created within the framework of a regular interval (daily, weekly, monthly, etc.—a concept I love). Another artist’s work in that exhibition was also tea-centric: '100 days' featured bowls that artist Tatiana Ginsberg crafted from paper and then used for her daily tea. Each bowl assumed a unique character as it "reacted to and recorded the specific act of drinking." An artist whose work I have come across more recently, Patti Roberts-Pizzuto, uses tea bags as the foundation for many of her lovely 'dailies' (daily drawings). It should be fun to see where my muslin tea bags lead me... 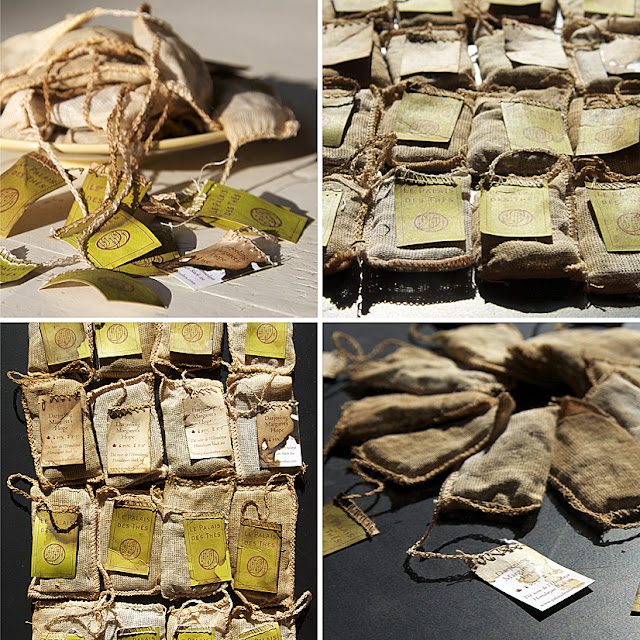 {A past blog entry about the pleasures of tea time can be found here.} 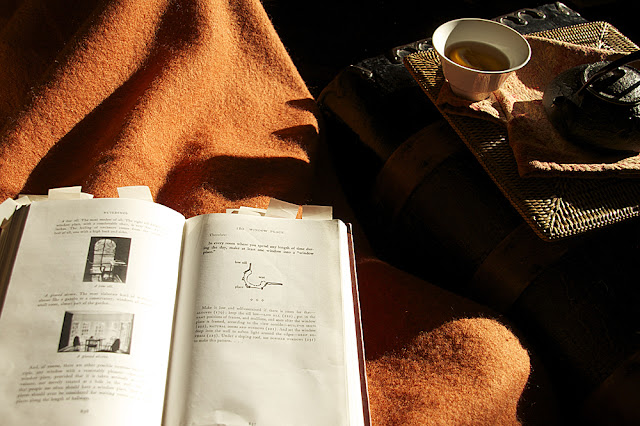 Here's hoping that, wherever you are—and whatever season you may be enjoying—you have a comfortable place to sit and read and daydream with something wonderful to drink.