A time for sorting things out


As part of our concerted effort to declutter, yesterday my daughter and I went on a little excursion to the Goodwill bin, which was followed by a gelato at the nearby Il Gelato di Filo (an excellent gelateria near the intersection that lies at the heart of the cozy San Niccolò neighborhood). Then my daughter and I parted ways: she toward home, and I to the rose garden. I'd had a quick walk through the garden with a friend last week, but there hadn't been time to linger. I'd never seen it right after the severe late-winter pruning, and its starkness took me by surprise; yet it also felt familiar, perhaps because I feel as though I'm at a similar point right now. In any case, I've been waiting for the chance to return so I could experience this favorite garden of mine in this particular phase.

I'm almost embarrassed to admit how many of the one-hundred-and-sixty-eight pictures I took were of thorny rose stems—bare of dried leaves, frost-bitten rosehips and just about all else (and most of which I am not including). I do find the garden very appealing in this state, and love how the structure of the plants is revealed at this time of year. 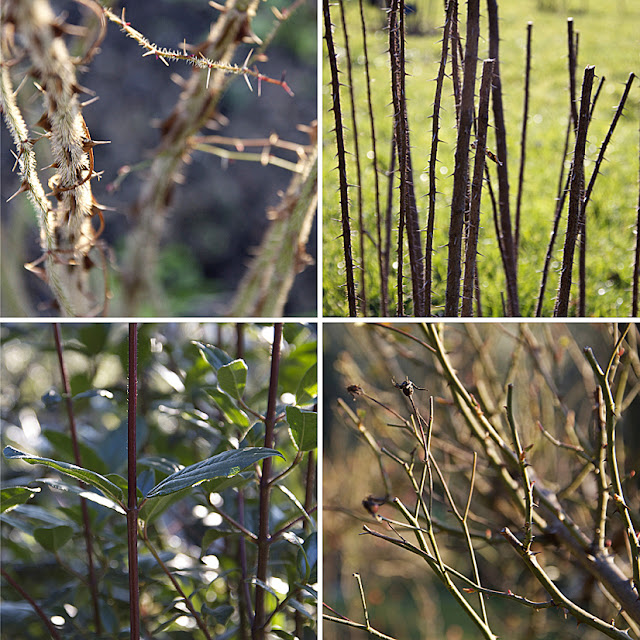 As I wandered, I wondered if I might find some red for this month's ROY G BIV photo challenge (details at the bottom of the post in case you haven't seen this mentioned before). I was not disappointed; there were rose hips, berries, red-tinged leaves and fresh red shoots on a tree/bush that I am really fascinated by but have yet to identify (all pictured below). As I'd noted last January, which was during the first winter the garden had ever been open to the public, the relative colorfulness is surprising for this time of the year. One lovely discovery was what may have been the caretaker & his family's Christmas tree (first image on the left); closer inspection revealed that clusters of berries had been tied onto a camellia bush with lengths of red ribbon. 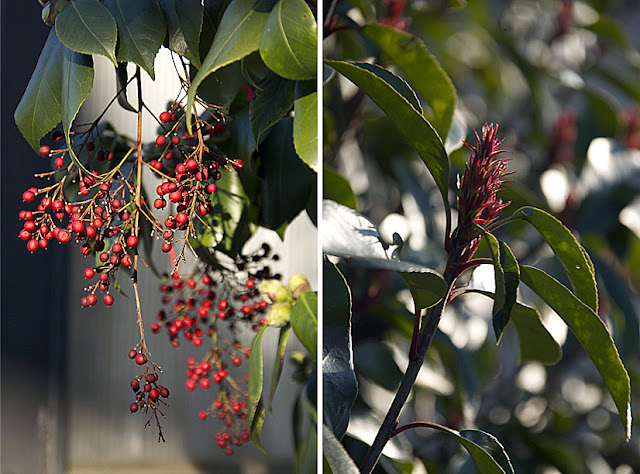 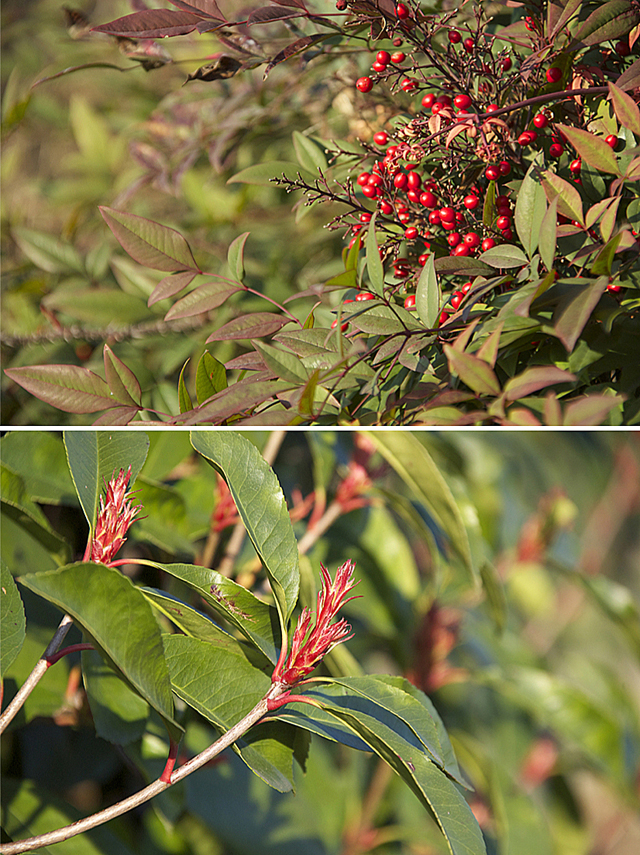 Each time I visit the garden I like to check on things I've been observing from one season to the next. Sometimes there are hints of what was, or what is to come. Left: The newest growth of another unidentified plant that develops the most amazing red stalks in late summer; you can just see the faintest trace of red in the young stems. Right: Some of the climbing roses, which weren't as severely cut back as the bushes, are already beginning to send out delicate clusters of leaves. 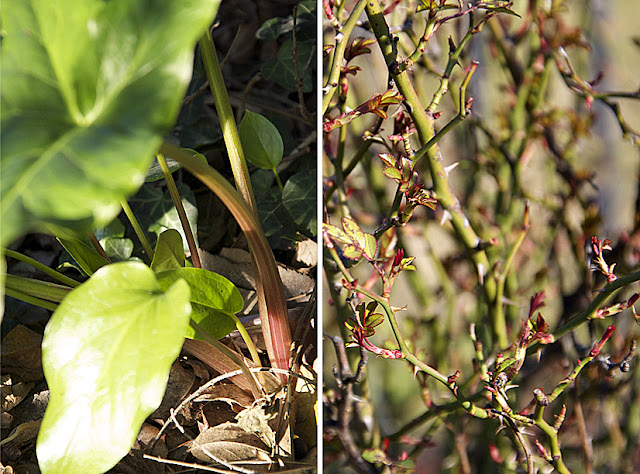 And finally, once I have made the rounds, if there's still time, I like to sit under my favorite olive tree (shown in the photo at the top of this post). By the time I reached it yesterday, the sunlight had thinned in that part of the garden, so instead I settled on a sunny bench nearby. As I enjoyed the warmth of the lowering sun, watching the shadows lengthen, February's word finally came to me. I've been trying to find the right word since the month began. Busy words, like 'sift', 'sort', 'separate', 'organize' & 'prepare', have all popped into my mind; so did quieter ones, like 'breathe' & 'cherish'. It's been a month of figuring out things before confronting a series of changes—some inevitable, some still unclear—so I've been torn between scrambling to get my life more organized and simply appreciating the momentary tranquility.

So finally, while sitting quietly at the top of the garden, a sign I had seen on a shop earlier crept into my consciousness. When I recently noticed its display windows obscured by paper, I feared it had joined the many others that have gone out of business in recent months, but on the way up to the rose garden I noticed there was a small sign saying 'Chiuso per riallestimento'...in other words, that it was closed while things were being sorted out. It is fairly common for shops to take a break in February, probably since it's the quietest season in Florence; the reason may be renovations mandated by laws or codes, a fresh coat of paint, a change of stock...or even just a well-earned & much-needed vacation. In any case, riallestimento, which derives from the verb allestire (to prepare/set up/fit out/stage/mount), with the prefix 'ri-' implying 'afresh' or 'anew', certainly feels like the right word to describe my state of mind right now.


Looking into the sun...
Top: A view of Forte di Belvedere and the area just outside Florence's old city walls. Bottom: Paving stones on one of the garden's lookout points. 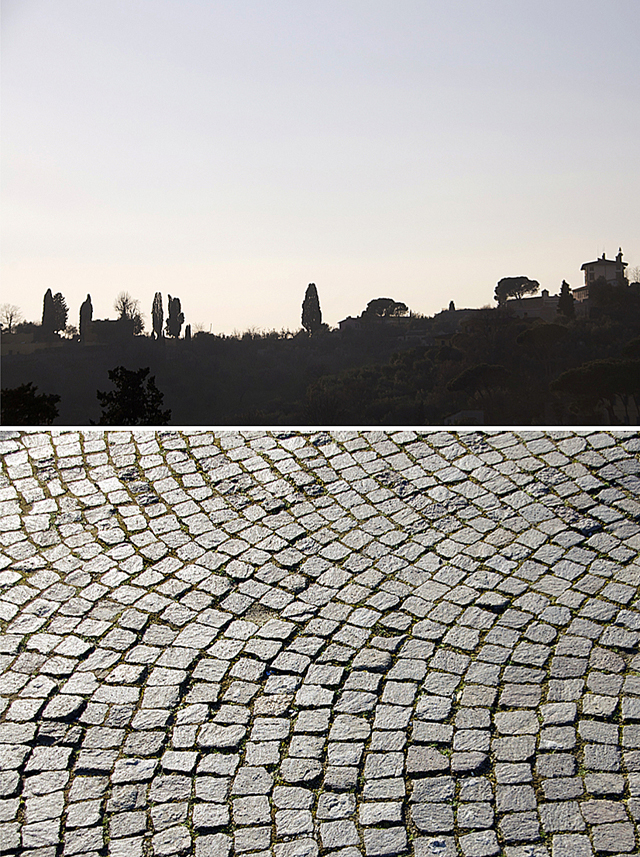 Looking down at the garden's main lawn, which is nearly bare after the heavy pruning (so very different from the rest of the year, when the bushes are full and create mini- semi-private zones where people picnic and read and nap)...

Lengthening shadows...
Left: A railing in the garden (which, alas, does not appear nearly as dramatic in the photo as it did in person). Right: The foot of the one-hundred-and sixty-two steps that lead from the San Niccolò neighborhood up to Piazzale Michelangelo, taken as I left the rose garden's lower entrance (another one can be reached from midway up the steps). 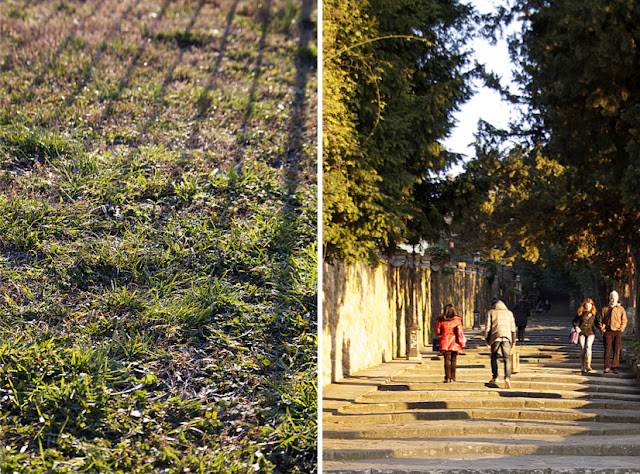 And no outing would be complete without a photo of the Arno. Much of the walk home is along the river (one of two routes  you can choose). This view shows the water passing over the weir-type of thing under Ponte alle Grazie (one bridge east-ish of the famous Ponte Vecchio). I have never gotten a photo of the Arno quite like this; it reminds me more of Venice's lagoon...


One last note: tomorrow artists Jennifer Coyne Qudeen and Julie Booth are kicking off round two of the ROY G BIV photo challenge. Details & guidelines are here if you'd like to join them for 'RED'; you have until Saturday to post up to five images inspired by shades & tints of red. Please check back here in the next couple of days for my contribution...

*
{Past posts about Florence's rose garden can be found by clicking on
'rose garden' in the 'Things I like to write about' section in the sidebar.}