Elements of peace, Part I - In the studio 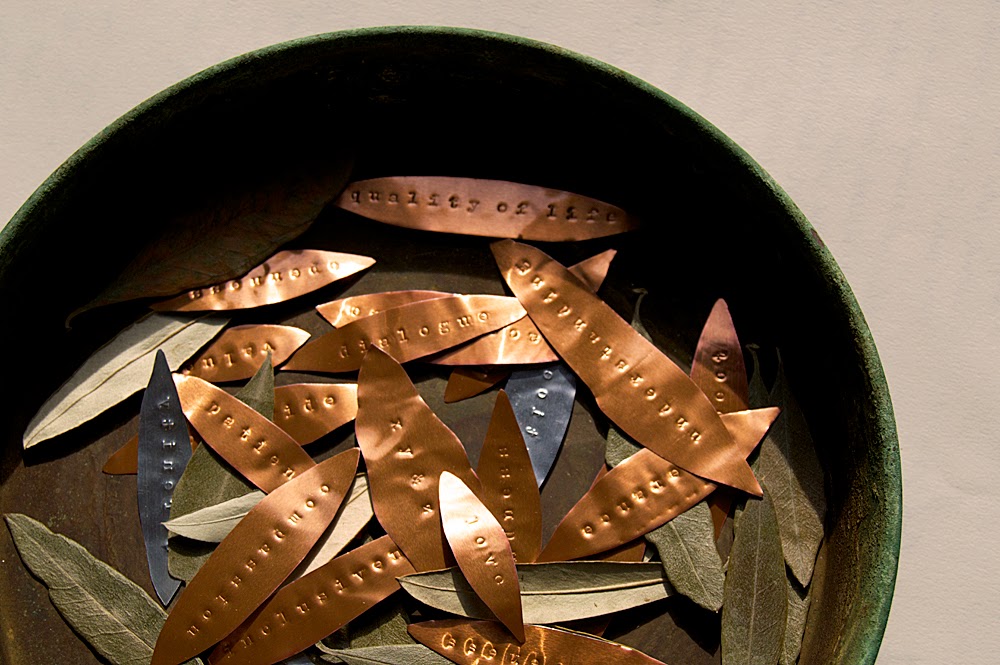 In honor of the International Day of Peace I have been putting together a modest installation of copper "peace leaves" that I will hang on my favorite olive tree at the rose garden later today: Elements of peace. It could just as easily have been called "The abc's of peace"—there is a word beginning with each letter of the alphabet...words that seem necessary to promoting peace. Actually, more accurately, there are twenty-four leaves: "a" to "w" + the twenty-fourth leaf, which says "x y & z" and is meant to symbolize the viewer/reader's own words for peace.

It feels a little like a miracle that this project finally came together. When Fiona Dempster, who created A Letter a Week (ALaW), proposed "peace" as the theme alphabet for ALaW 2013, it had me experimenting with many ideas. One of them morphed into this box/sleeve project for ALaW 2014 instead, but the olive branch/leaf motif that I had wanted to use persisted...just in another vein. This excerpt from my introductory post for ALaW 2013 explains how I planned to use olive leaves as part of the design:

At the moment, I'm working on a plan to incorporate both alphabets into a single 26-box piece. Since each box's "sleeve" has two 7x7-cm faces, I'll feature capital letters on the tops, and create a separate lower-case alphabet for the bottoms. I'm experimenting with an olive branch motif as the basis for decorative letters—similar to the idea of those Renaissance initials surrounded by patterns of leaves, stems, flowers and such—and will create a variation for the lowercase letters.

My, how ideas can change! Maybe I will delve a bit more into the whole process at some point, but in the interest of getting up to the rose garden to carry through with the final incarnation of this project I will refrain for now. In the meantime, below is a selection of photos showing some of the materials, inspiration & steps toward the little copper leaves that have emerged from this search for a way to spread a little more peace in the world.

Today, most of all, I just wanted to send a wish for peace
to all of you. I will post some photos of the leaves hanging
from the olive tree some time during the coming week....