Elements of peace, Part II - In the rose garden 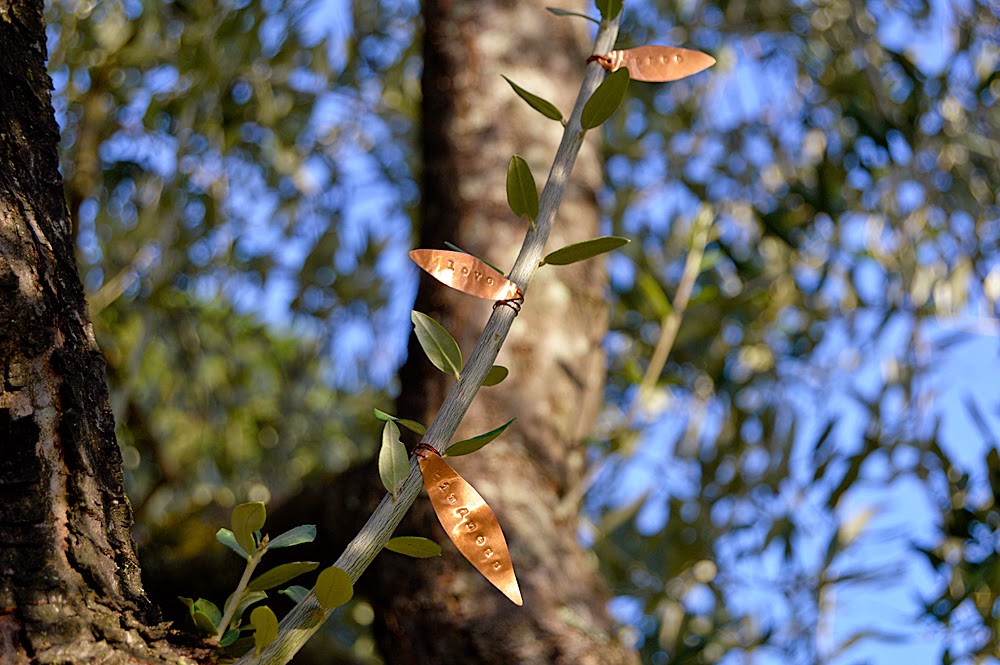 The wire-worded title of my modest peace "installation," Elements of peace, now encircles the trunk of the olive tree at the rose garden, and the copper leaves are finally mingling with the others on its branches.

On a beautiful late afternoon I drew the leaves, one at a time, from a small copper tray. First "respect," then "tolerance," then "justice." Silently, I wished the message of each into the breeze. As I continued, rather melancholy (but let's instead say "soulful") lyrics floated down from the nearby Piazzale Michelangelo as a musician strummed his guitar. 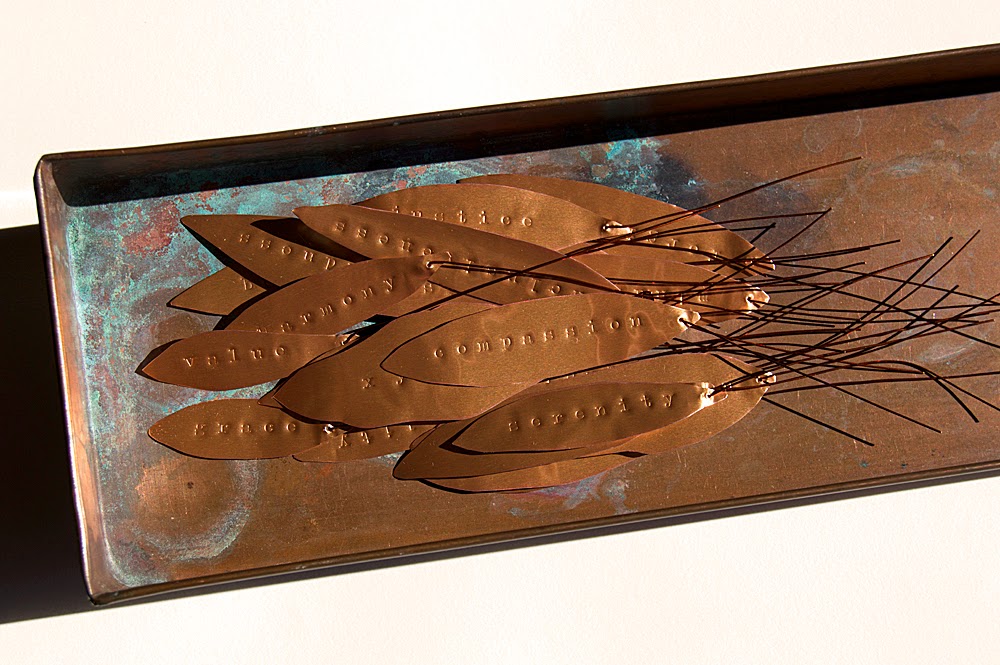 I took some pictures, then lingered as long as I could while still allowing time for a leisurely walk to the lower exit before the garden closed. 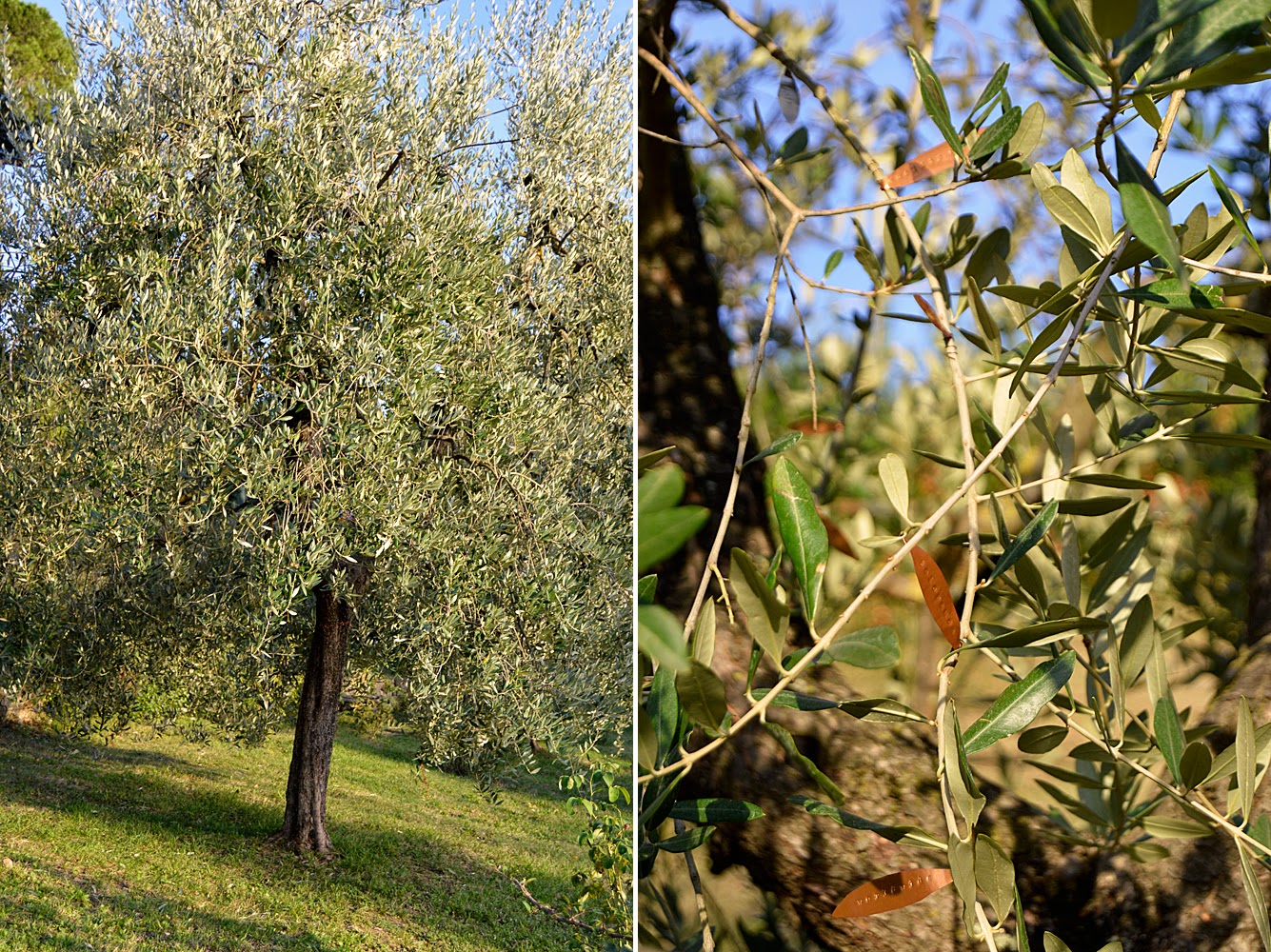 Photos in a moment, but first are some notes on how the peace leaves came to be. I nearly didn't include these thoughts I had jotted earlier in the week——there doesn't seem to be a logical place for them among all of the "installation" photos. But since I always enjoy learning some of the background on a project, I decided to go ahead with them for the sake of like-minded readers. Of course, you can just skip ahead to the rest of the images if you'd rather...

{As a way of expanding this "definition" of peace, later
in the post I invite you to send me a word of your own so
that I can add it to the olive tree. I was concerned
that my invitation might get "lost" in this long post,
so am reiterating it closer to the beginning.}

As I mentioned in the last post, this alphabet-inspired peace project came about because of the time I spent working with ideas for one of my A Letter a Week projects. As is common in my experience, the end result bears little resemblance to my original concept. On a 5:30AM bus ride from Montepulciano to Florence in May 2013 (to put in perspective how long this process can take), words inspired by how we might achieve more peace entered my head, replacing my initial plan to build my alphabet with the words for peace in twenty-six different languages. Those first foggy, early-morning words were woven around a theme of the arts——art, books, dance, music—as a way to promote peace, and large, flowing watercolored letters came to mind.


But as I worked to develop the concept in the studio, these arts-based words started to change; "art" became "acceptance," "books" became "benevolence," "dance" became "dialogue," music became "mindfulness," and the words became more about creating a definition, or ideal, of what is necessary to instill peace...of qualities that should be part of its process.

My favorite olive tree at the rose garden had been part of my inspiration from the beginning of this project——I always feel at peace sheltered under its branches——so there were some photo sessions focused on the foliage as well as some leaf-collecting (including a few guilty snips that enabled me to study them "in context" back in the studio). Sketches of the gently curved branch snippets followed. I think this is around the time I decided to impose the words upon the leaves. I worked for a while with page spreads that included a "flowing" letter watercolored within a deckled 7x7-cm square (as per the ALaW guidelines), positioned among hand-drawn olive tree branches that each contained a peace-related word written on one of the leaves. (An experimental page for this idea appeared in my last post.)

But the idea of integrating the words & leaves not merely on paper, but with the actual olive tree, kept entering my mind. I considered paper leaves, cut from 7x7-cm squares so I could allude to the ALaW guidelines, but they weren't delicate enough. I played with leaves made of both velum and watercolor paper, and even considered writing on the leaves of the tree itself. All of these solutions would have required protection from the elements (if they were to have any lasting power), so I experimented to that effect as well.

Creating the leaves of metal would have addressed the permanence concerns, but I figured this would entail tools and techniques that I didn't possess. While considering the pros & cons of twine-versus-wire for hanging paper leaves, I got the idea to construct the words of wire. ("Abstracting" letters with wire had been the part of yet another ALaW alphabet that I worked on last year, seen in this post..don't you just love the leaps from there to here, how an idea evolves——and patinas——with time?)

I spent a string of pleasant afternoons contemplating my peace words as I "wrote" them each with copper wire. Many words had to be done more than once because it took some practice before I could get the letters consistent enough, or because I hadn't cut a long-enough piece of wire (it was too hard to work with the whole spool hanging off the end). And then there was my favorite mistake——as I admired the satisfying curves of a word I had just crafted I realized that it spelled out h-a-m-o-n-y. My daughter and I are still laughing about that one. Anyway, eventually——before completing the words——I ran out of the .9mm wire I had been using.

Well, it turned out that the only craft shop I know of in Florence, where I'd bought the lovely antiqued copper wire, no longer stocks it. As I browsed the aisles, pondering whether I should go with the .8mm or 1.0mm wire that was available, I came across a stack of copper-coated metal sheets. So, as well as packages of both sizes of wire (in the end, I couldn't decide which to choose), I also left with the metal sheet, thinking that I could test it out for a future project.

Once home, I returned to my word-making using the 1.0mm wire, but it was a bit stiff for all of the curves, so I tried the .8mm——too flimsy!! I used my continued wire-waffling as an excuse to test out a leaf on the copper sheet, and tried writing out some words with a variety of tools...an awl, the tip of a bone folder, a wooden skewer. It turned out that an empty ballpoint pen worked best, but the letters still didn't "flow" very evenly. What I really wanted was some lovely metal type that would imprint uniform, perfectly spaced letters upon the metal——i.e. I was back to my original concern about not having the right tools to work with metal. But then I remembered having read in the manual for my Olivetti Lettera 22 that there was a "blind"-typing setting. I had tried it on paper, but found that it didn't make much of an impression. But maybe on the metal sheet?

And, just like, that, the project finally came together. I typed each word onto the metal sheet, traced the leaf shapes around them all, trimmed & smoothed the edges with wire wool, punched a hole in the end of each and strung a length of wire through. I used the 1.0 mm copper wire to create the title (somehow it worked just fine for that!). And, finally, attached the words to the olive tree... 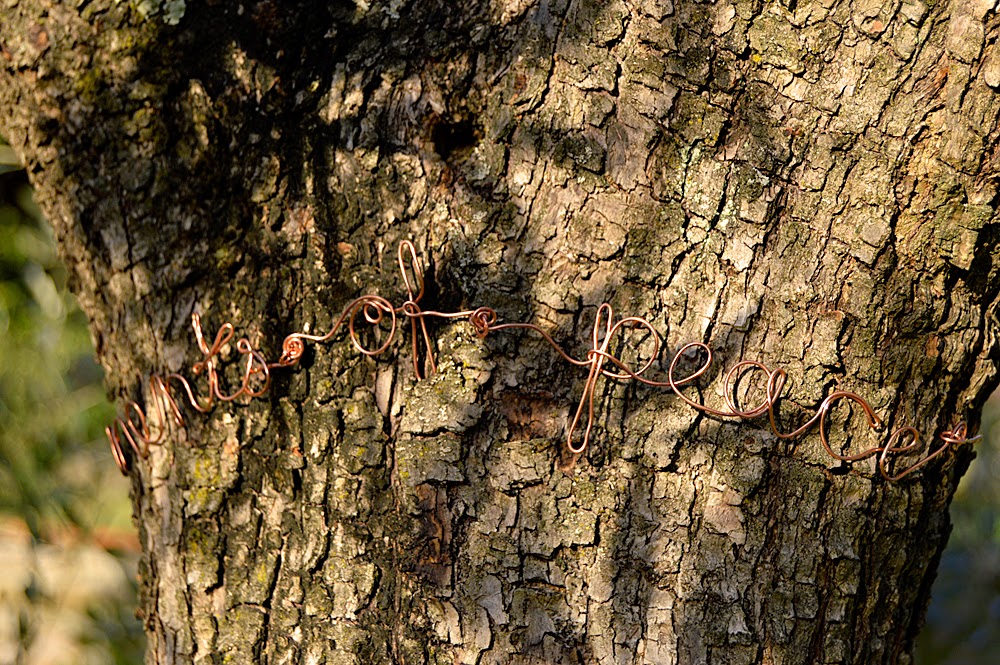 While I enjoyed the aspect of selecting each leaf/word myself, one at a time——it felt like a private, very personal act——part of me regretted not having involved others. There could have been Prosecco, and convivial toasts in the name of peace! Later, when I was discussing my experience/impressions of "installing" the leaves, my daughter suggested we create a ritual for friends & family that's inspired by one we were invited to observe when visiting my sister-in-law's parents this summer. Before we got on the road to continue our thousand-mile journey up the west coast of the US, Gloria & Mike asked us to choose a stone for their ovoo and place it with others left by past guests (a tradition whose roots lie in the Mongolian ritual that travelers perform in hopes of a safe journey). So now I am thinking of asking our future visitors if they'd like to type up a word on a copper leaf and add it to the tree...


Despite all of the thought, planning and time that went into this project, as I took in the tree once all of the leaves were in place, I couldn't help but feel that their impact was incredibly minimal. Indeed, the impression of inadequacy was similar to how I often feel about the challenge of bringing more peace into this world...

So why not cast the net even farther? If you'd like me to add a word for you, just leave a comment or send me an email and I will add your contribution to the tree when I next visit the rose garden.

On that note, I do wonder what I will find on my next visit? It's possible the gardeners, befuddled or possibly irate, will have removed the the copper leaves——or that another hail storm like the unprecedented one we had last Friday might whip them off the branches and into the wind. Or visitors may take the leaves as a memento of a pleasant hour spent under the olive tree while they enjoyed a sweeping view of Florence. I hope the latter as opposed to the former. In retrospect, perhaps I should have written the words in Italian so the project makes more sense on a local level. Maybe I will add some. In any case, I do like the idea of replenishing the leaves: just as trees regenerate, peaceful intentions should be an ongoing process.

As I descended into the lower part of the garden, I turned for a last look at the tree and was happy——and gratified——to see tiny hints of copper glittering among the branches.

Here are a last few "mementos" from my afternoon of tree-decorating... 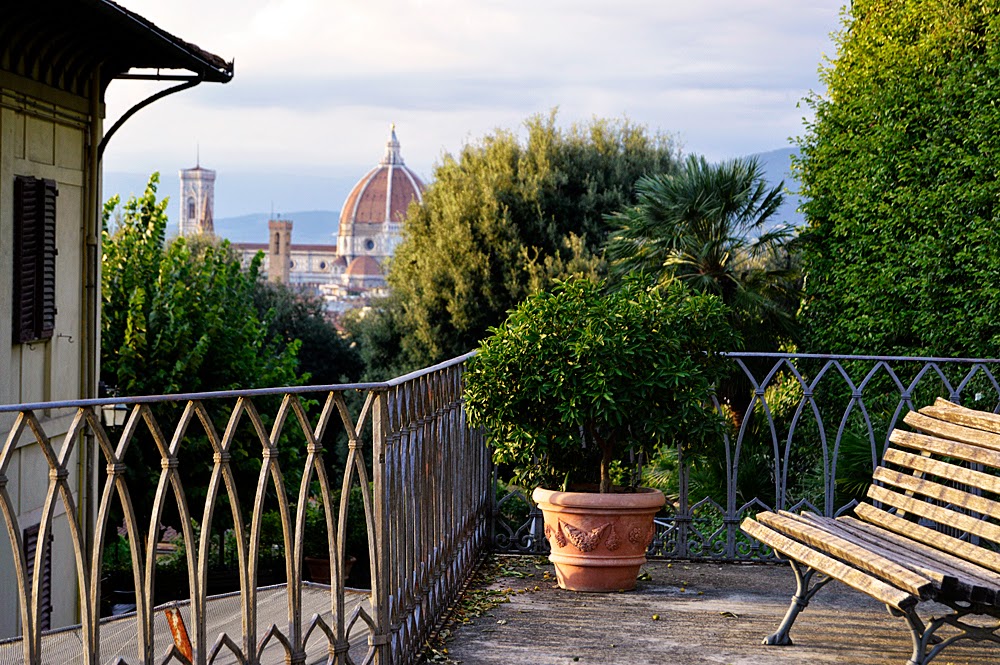 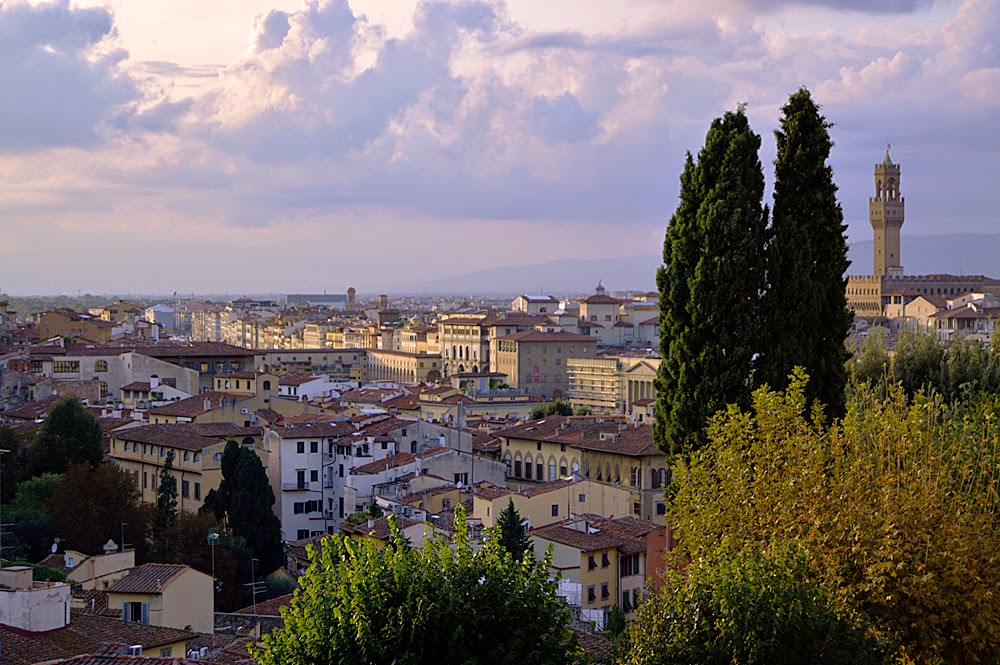 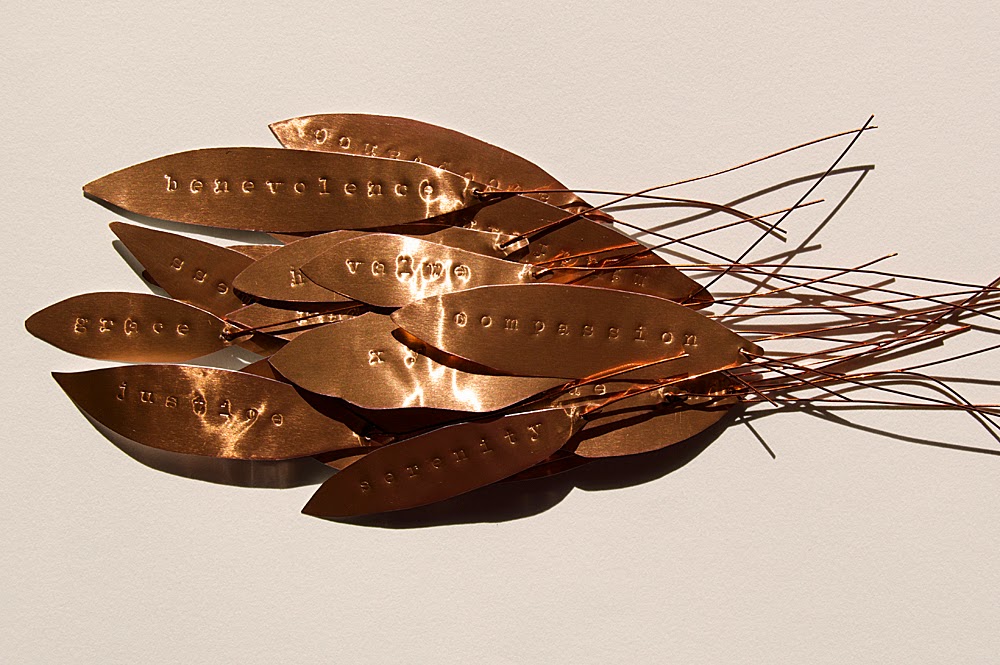