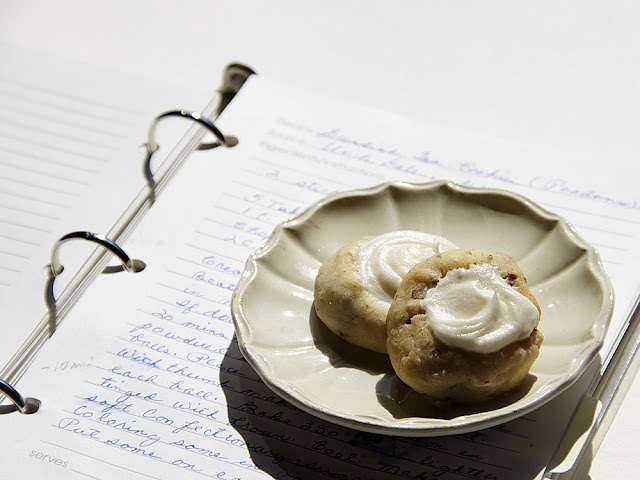 Grandmothers seem to instinctively know just how their grandchildren like to be welcomed. Within minutes of our arrival to my paternal grandmother's house, without fail, a tin was brought out and offered to the hungry travelers (those both young and not-so-young). A sweet, familiar scent wafted out the moment the lid came off. Inside, nestled between layers of parchment paper, were dozens of little cookies decorated with dollops of frosting in pastel shades—pink, green, yellow. Composed mostly of butter and sugar, these delightful indulgences received a dash of substance from the sensible inclusion of pecans.

A poodon-baking session seemed like the perfect way to honor my grandmother's ninety-first birthday, so out came the recipe she had copied down in the cookbook she put together when I got married. Her brother-in-law is credited with finding the recipe for these cookies in a magazine. Apparently he thought it amusing to emphatically call out "puh-DON" every time he pressed his thumb into one of the little balls of dough (which creates a space for the frosting), and that is how these Swedish tea cookies came to be called "poodons" by our family.

A fondness for sweets is not the only thing my Grandma encouraged in me. She has surely had an influence on my love of writing as well, a habit that for her dates back to 1935. Here, she's thinking about what was happening in her life before she discovered the pleasures of writing:

I was about to enter high school in the fall. I was what is known today as a "teenager" (the phrase not yet invented), and I felt at loose ends. We in the States were coming through the end of the depression...with lack of jobs, scarce money, many hardships, sometimes not much food to eat. There really wasn't much for young people to do. We did have one radio for entertainment, but no car, no money for movies, or magazines or treats of any kind. Because I was an avid reader even the book supply at the small, local library no longer interested me as I felt I had read all they had to offer. I was just "hanging," looking for something—anything—to do that would take away the empty feeling I had in my stomach.

But then she found out what a pen pal was. A friend her mother worked with subscribed to a magazine that devoted its back page to things that would appeal to younger girls (written by children's author Rebecca Caudill):

Besides words of wisdom for girls, and notes of interest, she was willing to pair up girls with each other so they could write to each other. It took a penny post card with your name, address, age and interests.

And so, in exchange for a copper penny, a new passion was born. I wonder how many hundreds of thousands of words my Grandma has written to people all over the world (many of whom she and my Grandpa were able to meet over the years). At one point, my grandmother's letter-writing habit even drew the attention of the local newspaper. The article they published recorded the fact that she had already collected a suitcase-worth of letters from South Africa during the first thirty-three years of a correspondence that ended up spanning fifty-eight years (and then continued for another decade with the woman's daughter!).

My Grandma is my first, longest-running and most loyal pen pal. I still remember trying to finish letters to her and my Grandpa in time to make the weekly "pouch" that would carry letters back and forth between the US and Brazil (where my family lived for five years). For all my good intentions, I have never been the letter-writer she is, but my grandmother saved the letters my sister and I did write during those years and then returned them to us when we were older—a precious gift that still revives distant memories of our childhood. As email became more popular, my grandmother learned how to navigate the cyber world as well, but her handwritten, typed or computer-printed letters still continued to arrive in our mailbox more often than those from anyone else.

At some point, my grandmother also began recording many of the stories that make up our family history, including tales not only of her childhood but also those that had been passed down from her mother's own (mischievous!) days as a little girl. A few years ago, my Grandma sent me a yellow folder filled with printouts of these stories, and her birthday seemed like a perfect occasion to pull out the sunshine-colored folder.
So, with a dish of poodons beside me, I lost myself for a little while in times long past—in pages telling of a favorite apple tree that served as a "playground and refuge" while my Grandma and her sisters were growing up . . . of playing "school," which entailed flour-sack towels, their mother's beads and "all the spare keys from around the house" as the three sisters tried to emulate the nuns who taught at their school (the beads stood in for rosaries and the keys produced the jangling that warned students of a nun's imminent arrival) . . . of her first peach canning session as a young wife, on a visit to the "country" relatives . . . of fragrant yellow violets transplanted from her childhood garden to the home where she and my Grandpa lived until his death sixty years later.

These recollections of my Grandma's evoke a sense of nostalgia reminiscent of Laura Ingalls Wilder's Little House books, which I've always loved (and still reread every once in a while). Many things were simpler in the "olden days"; others were considerably more difficult. Yet, in reading the accounts of other young women, no matter the decade, it's not hard to recognize the marked commonality that connects one generation to another. How lucky my family is that Grandma's yearning to write led her to record so many moments from her long life. 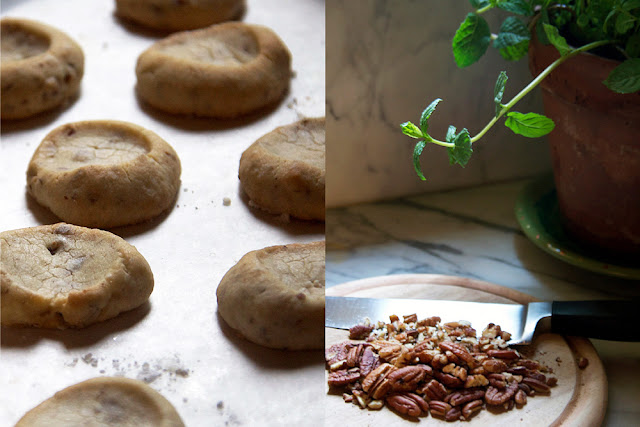 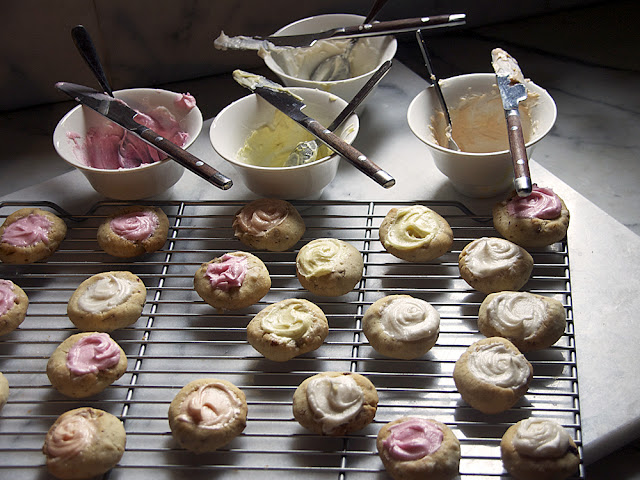 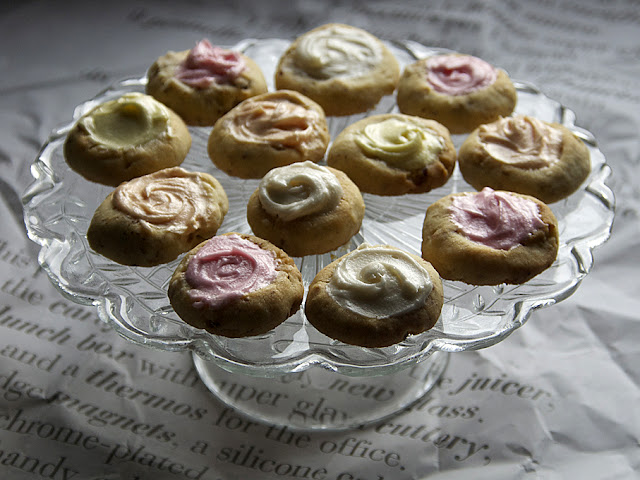 My Grandma baked thousands of poodons over the decades, and I wish we could return her kindness by sharing ours with her. They are quite a treat for us since pecans are hard to come by in Florence. In fact, only a scant half-cup remained from our stash—exactly enough for one batch of cookies. I can't think of a better way we could have used them. 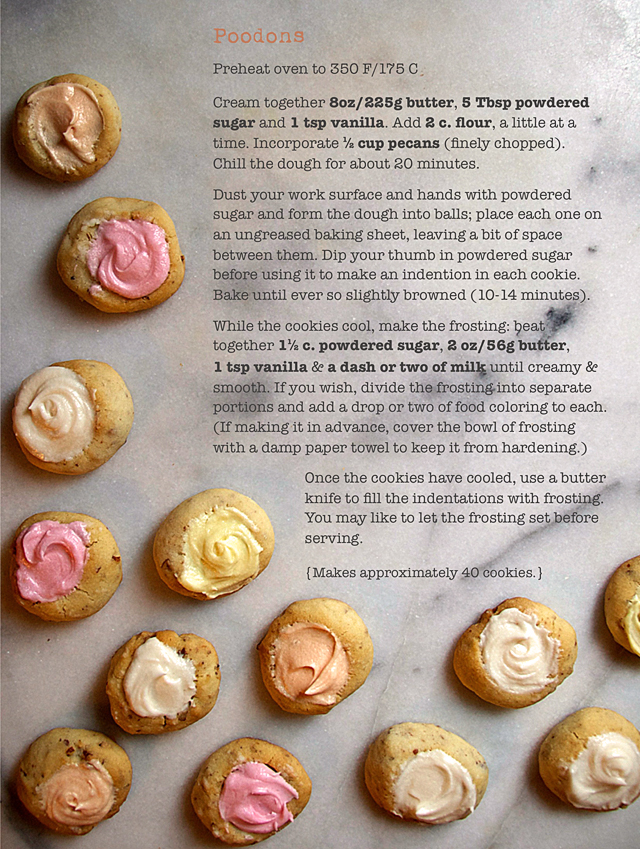