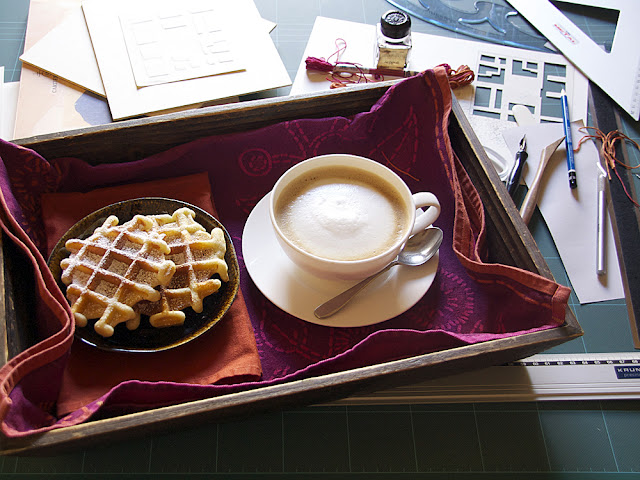 Moving furniture must be my favorite hobby. (It runs in the family.) I am always looking for ways to improve our daily lives through the design of our space, and find that the placement of our furniture tends to influence how we spend our time. I am also a firm believer in that principle of feng shui that suggests moving twenty-seven items in order to bring new energy to a space—and what more satisfying way to do this than by rearranging the furniture? (It's not unusual for friends to check to see what's changed since their last visit.) I'm amazed at how many configurations have been possible after living in the same seventy-square-meter apartment (roughly seven hundred and fifty square feet) for the past seven years...

A few weeks ago I cleared a lot of things out of the studio and came up with what seemed like an ideal new solution. Everything was nicely ordered, using the axis of the window as a reference point, with space flowing around each major piece of furniture. But for some reason I found myself mostly working at my smaller desk (an antique drop-leaf table), while stacks of papers and things piled up on the larger studio table, rendering it essentially unusable.

I knew that something needed to change, and fortunately it wasn't long before yet another plan emerged. My primary consideration is always to take advantage of the windows and the path of the sun—to allow daytime activities to be as close to the source of natural light as possible (which is not easy, considering that each room only has a single window). With the new layout, both tables are near to the studio window and the armchair is positioned to catch the late afternoon sun. The window is still fully accessible, which is important because I love to watch the goings-on in the street & the slice of piazza that's visible from the apartment.

Just as I'd hoped, as soon as I reorganized the studio, new energy started flowing into my creative work again. One of the many things I have been experimenting with this week is embossing. I have always loved the effect—those lovely shadows that allude, ever so gently, to the shape of something.

At first I wasn't quite sure how to go about it, but the inspiration I needed eventually came from artist Fiona Dempster's blog. As I mentioned recently, I'm enjoying the exposure to other artists that has come from participating in various creative projects this year; they are a generous lot, sharing their ideas, input, experiments and techniques. Fiona has done some beautiful work with embossing (with the great tip of recycling plastic milk containers into templates).

For my first attempts at embossing, I chose to focus on some of my favorite piazzas. (I am always contemplating new ways to interpret Florence's urban plan—its beautiful geometry is endlessly fascinating.) Using the original drawings for the piazza maps that I created for The Piazzas of Florence, I printed scans of these on to sturdy museum board. The photo below shows the results of the next step—cutting out the city blocks—which then reveals the defining outlines of the streets and piazzas. 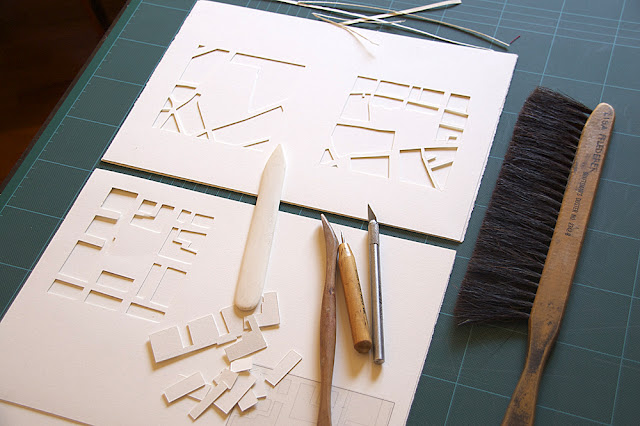 When I get lost in the rhythm of a laborious and precise cutting project like this, I am often transported back to the second year of my Architecture degree. After the first year's design studio, where we were gently introduced to the program on the nest-like top floor among the tree tops, as second-year students we were relegated to the 'Annex'. In this former war-time mess hall, a long room divided by eye-level partitions designating the various studio classes, we learned to make models—and messes—and to put up with each others' music, snoring and phone calls (made from the single telephone that hung from a slender wooden column). This is where a girl name Leila sliced off the tip of her finger with a misguided X-Acto knife (luckily the doctor was able to reattach it); I still think of her every time I pick up my X-Acto knife. It is also where the number of our graduating class began to dwindle. Those who survived the intense foray into model-making, the frequently tear-inducing crits and the all-nighters were allowed to return to Marvin Hall, the impressive stone structure that housed the School of Architecture...where we went on to experience more of the same!

But back to the twenty-first century... I experimented with several different kinds of paper for the embossing, and found that my old favorite, a creamy heavyweight Rives, works wonderfully. It's 100% cotton, with a nice 'tooth', and very malleable. I am able to ease it along the edges that delineate the city blocks/streets with my fingers, and then use a bone folder/other tools to make the lines crisp. While a proper press would be useful for such work, I find that I really enjoy using my hands for this process.

The photo below shows my first attempts on leftover strips of the Rives: the top left 'map' is Piazza Santa Maria Novella, at the lower left is Piazza della Repubblica, and the one on the right is Piazza della Signoria. It's only possible to incorporate one of the lovely natural deckles into each one due to their small size (about four-by-four inches), but I may hand-deckle the edges of the maps if I can salvage pieces large enough to permit this. Unfortunately, little of my stash of Rives remains, and I have not been able to find it locally. Ultimately I hope to have enough to do a limited edition of the twelve piazzas that I featured in The Piazzas of Florence.

I don't know yet how the end 'product' will turn out, in terms of mounting, borders, contrasting elements, additions like words, etc., but I expect at some point, in one form or another, the maps will be available in the PaperSynthesis shop. (Ideas?)

Incidentally, only after titling this Arzigogolare entry with a reference to the embossing process did I notice the recess/relief of the waffles that I had for breakfast (shown in the top photo). Funny how these little parallels can creep into your day... 'Recess & relief' also sounds like something we might need to indulge in every once in a while.

In these last days of April, the scent of spring is permeating Florence. Literally. As I was checking the stars late last night, the most delightful fragrance wafted through the windows. Even though there is not a patch of dirt in sight, from somewhere in the cool night rose the scent of the earth awakening—a mingling of soil and sun, water and life—bringing with it the definitive message that spring has taken root. A subtle, but unmistakable, shift. And then today, listening to the sounds of the morning, it seems as though, overnight, a new fleet of insects was born. Their bzzz-ing joins the footsteps and voices of early tourists, the hum of the street cleaning machine, the talkative birds and the chorus of church bells. Che bello...

Currently, copies of The Piazzas of Florence ship from the US (and shipping is free within
the US), but there will be a few changes to shipping policies for this item in the next few weeks.

The book will be available to ship during the following periods:
from now through Tuesday 8 May 2012
AND
between Friday 1 June and Friday 8 June 2012

From mid-June 2012 until the end of September 2012,
The Piazzas of Florence will be shipping from Italy instead of the
US. This means the shipping cost will decrease within Italy & Europe, but
increase to other countries (including the US). Also, please note that
a very limited number of copies will be available during this period.

Further details can be found in the PaperSynthesis shop.