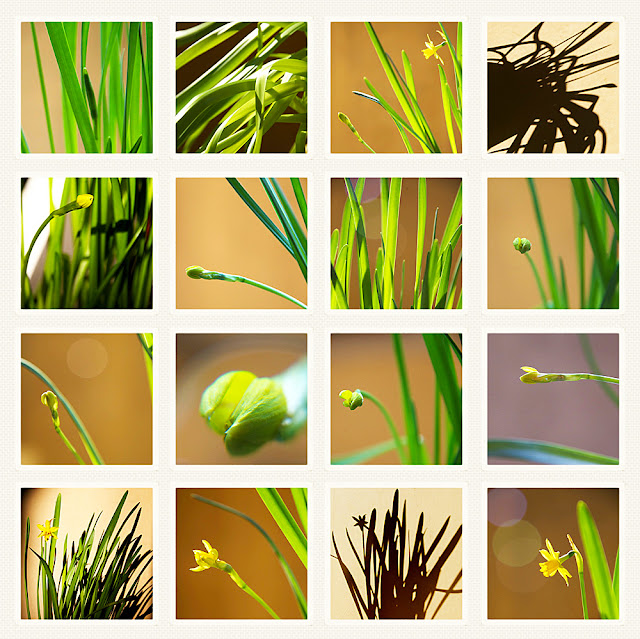 You know how, when the moon is near to the horizon, you can actually see it moving in relationship to mountains, buildings or other earth-bound landmarks? The sun's movement can also be easily perceived as you observe the slant of a shadow shifting before your eyes. It doesn't take very long to notice small changes like these. But what about the transformation of a bud into a flower?

You may have had your fill of daffodils in my last post (I know I thought I had), but it turns out they've had more to say since. In the process of salvaging the last few flowers to put in vases, I discovered several new buds, so instead of discarding the bulbs I pruned the floppiest leaves and returned the plant to its place near the window. It wasn't long before the remaining foliage & stems reverted to their former perky selves, and I wondered if the latent buds would bloom now that the plant had been given a new life.

The next day, as I'm sitting at the studio table, I glance at the plant and notice that one of the buds (which had basically been a long, flat extension of the stem just minutes before) is beginning to swell. Soon, the papery 'sac' starts to split, ever so slightly, and the bud grows curved and plump over the next quarter hour. Hooked by this transformation happening right in front of me, I set the plant on the sill, and position my stool to face it.

I begin this daytime 'vigil' shortly before one. As I try to concentrate on the bud, my mind can't help but wander to other things...namely how I'm going to get through the long line of projects if I don't tear myself away from the daffodil. Even with other tasks enticing me, I can't seem to resist the allure of an unknown path...you never know where it will lead. Sometimes to a dead end. But other times you find yourself waiting for the birth of a flower.


Every few minutes I take a new series of photos in an attempt to document the bud's transformation. The sun half blinds me, and sun spots creep into the images, but I'm trying to maintain the same position and not disturb the flower (as much as I would like to explore it with my fingers). The flower stems are camouflaged so well that I keep finding other buds among the leaves―it does not escape me that these daffodils have led to more discoveries than I could have imagined since I first brought the bulbs home (hoping they just might be paperwhites). Even though they were not my first choice, after living with them for the past few weeks, I find I have grown fond of their company.

I think one reason this botanical minutia especially intrigues me at the moment is because of the sestina I have been writing for my latest artist's book; it's inspired by a favorite quote of mine, "Don't judge each day by the harvest you reap, but by the seeds that you plant." As I work in the studio I often glance up at these words of Robert Louis Stevenson's; they remind me that the results of each day’s work aren’t always immediately apparent, helping me to stay focused on the process. I have been wanting to delve deeper into the realm of poetry, and the form of the sestina in particular appeals to me: it is structured around six words that repeat in a specific pattern throughout the course of six stanzas of six lines each (+ a three-line envoi). Who knows, there might even be a sestina hidden in this six-petaled daffodil...


The papery sac (called a 'spathe'―this new-found interest in daffodils has taught me a thing or two) continues to split like a seam, revealing the outer petals. Slowly, the bud changes its direction, away from the sun, giving me a new perspective. When my daughter arrives home from school, she finds me at the studio window instead of in the kitchen making lunch. Perplexed by my intention to stay with the emerging flower―but used to such unexpected twists in our days―she agrees to make lunch. We eat in the studio, keeping an eye on the emerging bud while she tells me about her day.

Around three o'clock the tips of the petals begin separating slightly, though they are still curved closely in the cupped form of a bud. The plant is in constant motion from the slight breeze that causes the stalks to sway, which makes it even harder to photograph the delicate bud perched at the tip of its stem. As the petals gradually differentiate from one another, their greenish cast fades, and the yellow becomes more pronounced. Still, the petals huddle close, and once the sun dips behind the buildings across from ours I figure the flower will only resume opening when the light returns tomorrow.

But it surprises me. By the time I check again after an hour or so, one petal has fully released itself, and then, in the space of four minutes, a second one follows suit. The corona that lies at the center of the outer petals is now visible, and it's clear that (after three-and-a-half hours), the bud has finally distinguished itself as a flower...

I didn't have a chance to go through the photos and my notes until now, so this entry is appearing one week after the 'event'. Incidentally, within twenty-four hours of first noticing the bud beginning to emerge from the spathe, all of the outer petals had fully released. Other daffodils have emerged in the meanwhile―and I even noticed another potential flower hiding in a second pot of bulbs that I believed was truly spent.
But I promise: no more talk of daffodils from this corner of the blogosphere...